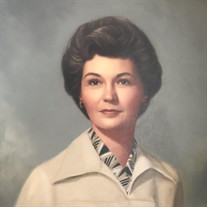 Rock Hill Margaret Ann Triplett died Thursday, November 4, 2021 at the Wayne T. Patrick Hospice House in Rock Hill. A graveside service will be held at Evergreen Cemetery in Chester on Tuesday, November 9, at 2 PM conducted by Rev. Dr. Jeffrey E. Bryan and Rev. Jane Sumney-Mullinex, Senior and Associate Pastors of Oakland Presbyterian Church, Rock Hill, SC. Born on January 11, 1930 in Starksville, Mississippi, she was the oldest child of Arthur Edgar and Minnie Lee Wiseman Vaughan. Four years later, her twin brothers, Robert Arthur and Richard Wiseman, were born. Her father worked for the Borden plant in Starksville and, after moving to Hopkinsville, KY for several years, the family moved to Chester, SC, where her father continued his work with Borden’s as the plant manager. Margaret Ann attended the public schools of Chester, including Foote Street School, and graduated from Chester High School in 1947. She then attended Winthrop College for two years where she majored in piano and English and was honored to be part of the May Queen court her sophomore year. On October 8, 1949, Margaret Ann married Frederick Amzi Triplett, Jr., a well-known bridge contractor also from Chester, SC at Purity Presbyterian Church in Chester, SC. Fred and Margaret Ann had three children, Margaret Lee, born April 4, 1951, Frederick Amzi, III, born August 20, 1954, and Jane Ellen, born October 31, 1957. Margaret Ann and Fred instilled a great love of music, reading, nature and traveling in their children. Over the years, wonderful family memories were made on their vacation trips together to places ranging from the Carolina beaches and mountains, to Florida, Virginia, Washington, DC and Montreal, Canada for the Epcot 1967 World’s Fair. Margaret Ann and Fred were active members of Purity Presbyterian Church where together they were Youth Group leaders beginning in the early 1960’s. Through the years, Margaret Ann participated in various circles, was a dedicated member of the choir, served as President of the Presbyterian Women of the Church, was elected for multiple terms as Deacon, served on a pulpit search committee and held the distinction of being the first woman Clerk of the Session. Margaret Ann was a lifelong member of Purity Presbyterian Church until she and Fred moved to a retirement home in Rock Hill, SC in 2011. She later transferred her membership to Oakland Avenue Presbyterian Church in Rock Hill, SC. Margaret Ann was involved in many local organizations. She was a member of the Chester Cotillion, the Up-to-Date Club, several bridge clubs and served as a President of the Chester Assembly. In 1969, she was delighted that her family was selected as “Young Family of the Year” by the local Girls Club. In addition, she was on the local advisory board of First Citizens Bank, as well as being a member of the D.A.R. In later years, Margaret Ann and Fred enjoyed traveling the world together with trips to England, France, Germany, Australia, New Zealand, Alaska, Hawaii, New England and the National Parks along the Rocky Mountains. She is survived by two daughters, Margaret Lee Triplett of Tega Cay, SC and Jane Ellen Triplett of Flat Rock, NC; two brothers, Robert Arthur and Richard Wiseman including her brothers’ wives and all of their children and grandchildren. She was preceded in death by her husband, Frederick Amzi Triplett, Jr. in 2011, and her son, Frederick Amzi Triplett, III in 1997. In lieu of flowers, memorials may be made to Purity Presbyterian Church, P.O. Box 278, Chester, S.C. 29706. Online condolences may be made to the family at www.barronfuneralhome.com

The family of Margaret Ann Triplett created this Life Tributes page to make it easy to share your memories.