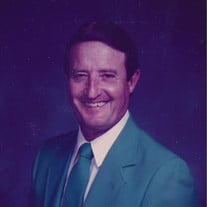 Chester Mr. George Harvey Moore, Sr., 86, died Tuesday, October 2, 2018, at his home. Funeral services will be held at 3:00 PM Friday, October 5, 2018, at Purity Presbyterian Church with Rev. Jason Myers officiating. The family will receive friends from 2:00 PM to 3:00 PM Friday at Purity Presbyterian Church. Interment with full military honors will follow in Evergreen Cemetery. Mr. Moore was born December 12, 1931 in Chester, SC and was a son of the late George Hicklin Moore and Mamie Lathan Moore. As a young man, he was a Boy Scout and rose to the rank of Eagle Scout with one Palm in 1946. He was a graduate of Chester High School and attended Clemson College from 1950 – 1954 with a major in Mechanical Engineering. He was accepted into the U.S. Air Force Aviation Cadet program on October 20, 1954 at Lackland Air Force Base, Texas. In June of 1956 he was commissioned as a 2nd Lt. and pilot at Reese Air Force Base, Texas. He was then transferred to Davis-Monthan Air Force Base, AZ as a co-pilot of B-47 aircraft. In 1960 he was a member of the first group of First Lieutenants to become an Aircraft Commander. He was transferred to Hunter Air Force Base, Georgia while flying C-124 transports during the period of 1963 until January of 1965. He was then assigned to Vietnam to fly O-1 aircraft as a Forward Air Controller. During this period, he was also an Instructor and taught two classes of Vietnamese pilots. Later, he was assigned to Xuan Loc, again as a Forward Air Controller and was shot down on November 2, 1965. From October 1965 to April 1966 he was assigned to fly for Special Forces in Vietnam. Interestingly, while in Vietnam, he was assigned to the U.S. Navy aircraft carrier Midway for a week and flew several missions with their aviators. He left Vietnam in April of 1966 for a three year assignment in Germany where he was Chief of Base Operations and Training from 1966-1969. Following this assignment, he was sent to K.I. Sawyer Air Force Base, MI where he flew the B-52H from 1969-1974. In 1970, while assigned to Sawyer, he flew B-52H aircraft out of Utiopa, Thailand in support of U.S. troops in Vietnam. During the period 1973-1975, he was Chief of Safety. In 1975, he was assigned to Castle Air Force Base, CA as Chief of Safety and in 1977 was sent to Maxwell Air Force Base as Director of Safety for the Air University of the U.S. Air Force. He attended numerous training courses while in the U.S. Air Force and a number of colleges and graduated from Orange College, CA in 1977 with a B.A. degree in History and a minor in Business. He flew more than 500 missions over Vietnam totaling more than 900 hours of combat air time. During his Air Force career he accumulated about 6000 hours of total military flight time. He was awarded the Distinguished Flying Cross with Oak Leaf Cluster, the Air Medal with 22 Oak Leaf Clusters, the U.S. Air Force Commendation Medal with one Oak Leaf Cluster, the Purple Heart, the Meritorious Service Medal, the Good Conduct Medal, Combat Readiness Medal, the Vietnamese Service Medallion with two Bronze Stars – pending the Silver Star, the U.S. Bronze Star and the Airman Medal. During his Air Force career he flew PA-18, T-6, B-25 Mitchell, B-47, C-124 Transport, O-1 (Forward Air Control), A-1, C-47 (military version of the DC-3), F-4 Phantom, B-52 and T-39 aircraft. George retired from the U.S. Air Force as a Lt. Colonel on December 1, 1979 and returned to Chester, SC. For a while, he helped his father run his farm and later bought out his father’s beef cattle operation and ran it for 10 years. Active in the community, he was formerly President of the Chester Lions Club and both President and Treasurer of the Chester District Genealogical Society. He was a member of Purity Presbyterian Church where he served as a Deacon, Elder and Sunday School teacher. He is survived by his wife of over 37 years, Harriett “Penny” Knight Moore; four children, Denise Bailey (Chris) and Jason Moore both of Merced, California; Kim Bates (Derek) and Debby Stidham (Bill) both of Winnsboro; eleven grandchildren; nine great grandchildren; one brother, Hugh Moore (Brenda) of Chester; three sisters, Helen M. Lee of Chester, Betty M. Nichols (Henry) of Rock Hill and Frances M. Hjalmer of Chester; daughter-in-law, Becky Moore of Merced, CA; sister-in-law, Diane Moore of Charleston, SC; and numerous nieces and nephews. Mr. Moore was preceded in death by a son, George Harvey Moore, Jr.; a brother, Edward Moore; and a sister, Linda Jean Moore. Memorials may be made to Purity Church, P.O. Box 278, Chester, SC 29706 or American Parkinson Disease Research, 135 Parkinson Ave., Staten Island, NY 10305. Online condolences may be made to the family at www.barronfuneralhome.com.

The family of Mr. George Harvey Moore Sr. created this Life Tributes page to make it easy to share your memories.