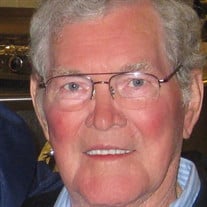 Francis Marion Campbell, age 87, passed away Wednesday, July 13th2016 at Baylor Regional Medical Center in Plano, TX. A graveside service will be held on Monday, July 25th at 12 Noon with Rev. Eric Shepard officiating at Chester Memorial Gardens located at 945 West End Road, Chester, SC 29706. Visitation is planned for Sunday evening, July 24th from 6 to 8 pm at Barron’s Funeral Home located at 133 Wylie Street, Chester, SC 29706. Mr. Campbell was born to the late Francis Marion Campbell Sr. and the late Ruby Keller Campbell on May 25th 1929 in Chester, SC. He married Ilda June Roberts Campbell on October 23, 1958 also from Chester, SC. and shared 57 years of marriage. Upon graduation from Chester High School in 1947 he then attended the University of Georgia graduating in 1951. He was a 3 time football letterman for the school and would be named all-conference in 1949, 1950, and 1951. While at Georgia he earned the nickname “Swamp Fox” that would follow him throughout his life. After graduation he served 2 years in the U.S. Army before starting his NFL playing career. Marion was a 4th round draft pick of the San Francisco 49ers in 1954 where he played 2 seasons. He then played 6 more seasons with the Philadelphia Eagles earning All Pro Honors as a Defensive End in 1959 and again in 1960 on the Eagles team that won the World Championship. He started his professional coaching career as Defensive Line Coach for the Boston Patriots in 1962. He would continue his long coaching career with the Minnesota Vikings and the Los Angeles Rams where he coached the famed “Fearsome Foursome”. He would go on to be the Defensive Coordinator for the Atlanta Falcons and Philadelphia Eagles during his career. In 1980 the Eagles won the NFC Championship and participated in Super Bowl XV. During his career he would also be named Head Coach of both the Atlanta Falcons (twice) 1974-1976 & 1987-1989 and Philadelphia Eagles 1983-1985. He retired from his NFL coaching career in 1989. He was honored to come out of retirement in 1993 to become Defensive Coordinator for his alma mater at the University of Georgia. During his many years in football he developed many special relationships with teammates, players, and coaching colleagues, some of which led to lifelong friendships. Marion was inducted into the South Carolina and Georgia Sports Hall of Fame. Marion was an avid fisherman who spent many hours on Lake Hartwell where he had a vacation home. He and his wife, June, would later move to St. Augustine, Florida where he enjoyed playing golf and visiting his grandchildren. He also enjoyed many trips traveling to Alaska with his wife in an RV they had purchased exclusively for their Alaska road trips. He is survived by his loving wife Ilda June Roberts Campbell, Plano, TX: his son, daughter and their spouses: Scott ( Cindy) Campbell of Destin, FL and Alicia (& Preston) Freeman of Plano, TX. Marion is also survived by 4 grandchildren: Courtney & Caroline Campbell: Trevor & Reese Johnson as well as his dear sister Doris Joe Campbell of Chester, SC. Flowers/Cards will be accepted: however, those who wish may make a memorial donation to the Alzheimer’s Association at www.alz.org. or by mail at Alzheimer’s Association 225 N. Michigan Ave. FL 17 Chicago, IL 60601

The family of Mr. Francis Marion Campbell,, Jr. created this Life Tributes page to make it easy to share your memories.