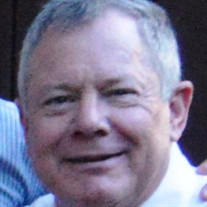 Robert Patrick Stutts, Jr. (Bob and Uncle Bobby), 68, of Columbia, SC, left his family and friends on Thursday, June 20, 2019. Bob was born in Charleston, SC, on October 11, 1950. He was the son of the late Robert Patrick Stutts, Sr. and Mozella McClure Stutts. He was preceded in death by his nephew Andrew M. Dodson. He is survived by his sister, Robin Stutts Dodson and her husband, Barry, his nephews, Kent Dodson, Robert Dodson and his wife Katherine, his niece Lydia Dodson, two great nieces, Natalie and Isabel Dodson, and cousins on both sides of his family. Bob graduated from Great Falls High School in 1968. He received his BS from Presbyterian College in Mathematics in 1972. Immediately following his degree, he spent two years serving our country in the US Army in Korea, as he fulfilled his ROTC commitment. After the Army, he served in the Army National Guard for several years as he began his formal teaching career. He received his Masters of Art in Teaching from the University of South Carolina in 1977. In SC, Bob began teaching Mathematics at Blackville High School. When he moved to Columbia, he taught several years at Columbia College. At Richland Northeast High School, he taught AP Calculus, AP Statistics, Geometry, and many other Math courses. He completed his career teaching Engineering Mathematics at Westwood High School. Bob retired in 2016. After his retirement, he volunteered at the Richland Library Friends and Foundation, where he was a beloved member of the Thursday Book Barn Group. He served over 700 volunteer hours and greatly enjoyed his work as a Library Ambassador. Bob was a jovial, kind, caring, and genuine friend to all he met, and he will be greatly missed by all his family and friends. A visitation in his honor will be held on Wednesday, June 26, 2019, from 6-8 PM at 1667 Shady Lane, Columbia, SC, 29206. His funeral service will be held on Friday, June 28, at 1 PM at Union Associate Reformed Presbyterian Church at 3594 Lancaster Hwy, Richburg, SC 29729 with visitation immediately following the service. Memorials may be sent to The Richland Library Friends and Foundation (1431 Assembly St., Columbia, SC 29201) or the American Heart Association. You may visit his online obituary for more information at Barron Funeral Home.( https://www.barronfuneralhome.com/)

The family of Robert Patrick Stutts Jr. created this Life Tributes page to make it easy to share your memories.