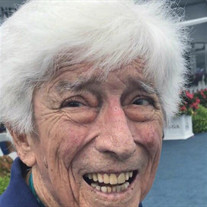 Chester James Dallas May, 97, a loving husband, father, brother, grandfather, and great-grandfather died surrounded by his family on April 30, 2018, secure in the promise of eternal life through Jesus Christ. A native of Donalds, SC, Dallas was born on December 16, 1920, the son of the late Andrew Jackson May and Corrinna Austin May. The youngest of nine children, he was cherished by his older sisters and treasured by his brothers for the sweet and gentle spirit he exhibited throughout his life. He was predeceased in 2014 by his wife of 62 years, Jane Brawley May, for whom he served a precious caregiving role in her dear last year here. He is survived by his two daughters, Laura May Oliphant (Alex Oliphant), of Chester and Pamela Susan May of Charlotte, who loved him so; two grandchildren, Hilary Katherine Browning (Ethan) of New Bern, NC, and James Hunter Cox of Charleston, SC. His two great-grandchildren, Madeline Jane Browning and Waylon Thomas Browning recently enjoyed a special visit with “Poppy” in the hospital. He is also predeceased by his sisters and brothers, and is also survived by numerous special nieces, nephews, their families, neighbors, friends, and special caregivers who were all like family; Katie Coleman, Emma Chisholm, Mechelle Killian, and Debra Brice. He may not have wanted this in his obituary, but we feel there was no man like him and our loss is terribly profound. He graduated from Donalds High School, the only boy in a class of 15. He entered Clemson A&M College in 1941 and, in 1942, his college career was put on hold as he entered the U.S. Army, where he served as a sergeant in the Third US Army Corps 94th infantry division, Patton’s Third Army Forward. He was stationed in Rhineland and Central Europe in WWII. He was selected for further Officer Training School, but a bout of pneumonia prevented him from attending. He received a nomination to attend the University of Heidelberg, but declined in his longing to return home. His stories of WWII are few, but they include reaching the Remagen Bridge on Easter Day 1945; the particular beauty of Austria, and his decision not to visit the concentration camp after liberation given his lifelong depth of compassion that would have made this his hardest memory of war. He resumed his education at Clemson A&M College upon receiving his honorable discharge in 1946, graduating in 1949 with a Bachelor of Science in Textile/Mechanical Engineering. His career took him to Oerlikon, GE, Douglas Aircraft, and Lockheed Martin where he worked on design of the Lockheed C-5 Galaxy, one of the largest military transport planes ever made. He finished his career at Fluor Daniel in engineering and business pursuits including consulting after retirement. Daddy met and married Jane Brawley in 1951, thanks to an introduction from his college friend, Jane’s brother. They made homes in Hendersonville, Spartanburg, Charlotte, and Dallas, TX, with the majority spent in Jane’s hometown, Chester, SC where he built a house knowing her desire to be near family during his frequent travels since he never worked in Chester. He maintained an idyllic little second home and land in his homeplace, Donalds, SC, for many years. He was the spiritual head of our household having a deep and abiding faith in the Lord, enabled by his trust in the sacrificial redemption of Jesus Christ. By location, his churches were Due West ARP, Purity Presbyterian, Highland Park Presbyterian in Dallas, and Chester Associate Reformed Presbyterian. His presence will be missed and his memory cherished at Hunter’s upcoming graduation from the Citadel. Disappointed that Poppy would likely miss this milestone, Hunter surprised us from Charleston with full dress uniform in tow. We observed a special family ceremony with a final salute from Hunters’ hero, the man in whose footsteps he’d always determined to follow into mechanical/aeronautical engineering. Services will be held on Wednesday, May 2, 2018, in Chester, SC, at Chester Associate Reformed Presbyterian Church (ARP), 109 Wylie Street, Chester, SC 29706, visitation at 10:00 am; service at 11:00 am; interment to follow at Old Purity Cemetery at 673 Great Falls Highway with military honors with the Reverend Clint Davis officiating and the Reverend Steve Bishop participating. In lieu of flowers, memorials may be sent to Chester ARP Church, 109 Wylie St, Chester, SC. Online condolences may be made to the family at www.barronfuneralhome.com.

Chester James Dallas May, 97, a loving husband, father, brother, grandfather, and great-grandfather died surrounded by his family on April 30, 2018, secure in the promise of eternal life through Jesus Christ. A native of Donalds, SC, Dallas... View Obituary & Service Information

The family of Mr. James Dallas May created this Life Tributes page to make it easy to share your memories.