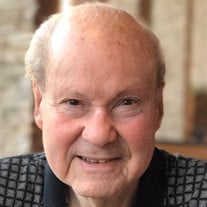 James Heath Baker James Heath Baker, age 90 of Matthews, NC entered peacefully through the gates of heaven on Tuesday, February 18, 2020. Heath was born on January 2, 1930 to the late Wesley and Clemmie Baker in Monroe, NC. Heath leaves to cherish his memory, his loving family, daughters, Cindy Pope (Earl), Chris Kelly (Mark) and Melodie Tate (Joe); 10 grandchildren, Heather, Courtney, Lauren, Meredith, Caitlin, Zachary, Haley, Mallory, Jackson and Brayden; and 5 great-grandchildren, Rylie, Decklan, Wyatt, Eden and Lilah. He was preceded in death by his wife of 62 years, Betty, his son, Alan and 3 brothers and 2 sisters. Heath attended schools in Mecklenburg County until joining the US Army. Upon his return, he began his career in the shoe repair industry and later opened his own business, Baker’s Shoe Service, which he operated for 23 years until retirement. Heath was a lifelong Baptist and served as a deacon and usher, as well as on various committees. He was a faithful member of Idlewild Baptist Church until his passing. Heath was liked and respected by everyone who knew him. To know him was to love him. Heath loved his family deeply and was happiest when surrounded by them. The family will receive friends on Sunday, February 23rd from 1:30pm to 3:00pm with the funeral to follow at 3:00pm at Idlewild Baptist Church, Matthews, NC with Reverend Jason Hughes and Reverend Clay Waldrip officiating. Interment will follow in Sharon Memorial Park. The family would like to give special thanks to the staff at The Blake at Edgewater, White Oak Manor-Waxhaw, and the Levine & Dickson Hospice House at Aldersgate for the loving care they provided. Memorials can be made to the Alzheimer’s Association Western Carolina Chapter 4600 Park Road #250, Charlotte, NC 28209 or Hospice & Palliative Care-Charlotte 7845 Little Avenue, Charlotte NC 28226. Online condolences may be made to the family at www.barronfuneralhome.com.

The family of James Heath Baker created this Life Tributes page to make it easy to share your memories.