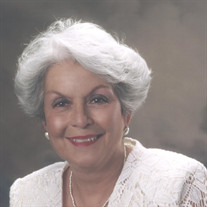 Helen Jane Gamble Murray left her earthly life and entered the kingdom of Heaven on May 20th 2017. Her three children were by her side. Born on November 15th 1929 in Waxhaw, NC, “Helen Jane” was a beautiful woman inside and out. Jane was the oldest of three children of Henry Wriston Gamble and Helen Krauss Niven Gamble. She attended school in Waxhaw, graduating from Waxhaw High School in 1945. She then attended Winthrop College where she majored in vocal performance. In February of 1948, Jane met Donald Bayne Murray at a dance held at Clemson Military College. Smitten by each other, they were married the following fall on October 9th 1948, and made their home in Chester, South Carolina. Jane and Don were married for 54 years until Don’s death in 2002. Jane later moved to Rock Hill, South Carolina. Jane served her church, her family, and her community well. She was a member of the TEL Sunday School Class of Chester First Baptist. She was past president of Mid Century Study Club. Jane loved family beach trips to Garden City and summers at Pleasant Grove Camp Meeting. She never missed a Camp Meeting in her eighty-seven years. Her greatest joys were her grandchildren, and she never missed an opportunity to let them know how important they were to her. Jane had poise in all that she undertook and an uncanny ability to make others feel comfortable in her presence. Jane was not only known for her inner and outer beauty, but also her radiant soprano voice. She was a long time member of the choir at First Baptist Church of Chester, The Rock Hill Choral Society, and the Rock Hill Music Club. Jane was a soloist at many occasions and blessed others with her talent throughout her life. She used her gift of voice as a ministry to others even up until recently singing in local nursing homes and community events. Jane was also one of the original Springmaid Girls, a marketing campaign devised by the late Colonel Springs for his cotton mills in the early 1950’s. As risqué as the ads may have been at that time, Jane eloquently posed for the “Buck Well Spent” advertisement. Through her years, Jane’s active involvement made a significant difference in her community and the lives of others. For many years in the 1950’s and 1960’s, Jane chaired the annual Christmas Parade for the city of Chester. She organized the many Miss America banquets held during the Christmas season and was awarded Chester’s “Woman of the Year” honor for her enthusiastic civic involvement. Jane worked for a time in the Chester school system as an elementary and junior high school secretary. She also had impeccable bookkeeping skills and used those skills to assist her husband’s Lumber and Realty Company. “Helen Jane” to some, “Jane” to others… “Mrs. Murray” to many… “Mama” or “Nanie” to her children and grandchildren… Jane was “mother” to us all. With her sense of humor and quick wit, she made others feel like one in a million. As her health declined she strived to ensure that her life would still have meaning. In and out of hospitals, Jane touched the lives of many. She has taught us all to live with strength and integrity, and just how precious relationships with family and friends are. At every opportunity, Jane served her Lord well and nurtured her family and friends. Jane was predeceased by her parents, Helen and Henry Gamble; her husband, Donald Bayne Murray; and her brother Henry Wriston Gamble Jr. She is survived by her children Donny Murray and his wife Lorrie, Jan Murray Moore and her husband John, and Martha Murray Barnes and her husband Johnny; a sister, Patricia Gamble McGee; grandchildren, Julia Fay Murray, John Wriston Barnes, Virginia Gracen Barnes, Donald Milling Barnes, John Harris Moore, Hayden Everett Murray Moore, and Niven White Murray Barnes. The family is grateful to the loving and caring staff of the Wayne T. Patrick Hospice House of Rock Hill. A celebration of Jane’s life will be held on Tuesday May 23rd at 3 p.m. at First Baptist Church of Chester with the Reverend Clay Waldrip and Dr. Joe Roberts. A time of gathering for friends and family will precede the church service at 1:15 pm in the church narthex. Interment will be private. The family suggests that memorials be made to Chester First Baptist Church, 102 Church St, Chester, SC 29706, or Pleasant Grove Methodist Camp Meeting, Attention: Treasurer, 658 Cottonfield Circle, Waxhaw, NC 28173. “For we know that when this tent we live in now is taken down-when we die and leave these bodies we will have wonderful new bodies in heaven, homes that will be ours forevermore, made for us by God himself, and not by human hands.” 2 Corinthians5:1 Online condolences may be made to the family at www.barronfuneralhome.com.

Helen Jane Gamble Murray left her earthly life and entered the kingdom of Heaven on May 20th 2017. Her three children were by her side. Born on November 15th 1929 in Waxhaw, NC, &#8220;Helen Jane&#8221; was a beautiful woman inside and out.... View Obituary & Service Information

The family of Mrs. Helen Jane Gamble Murray created this Life Tributes page to make it easy to share your memories.