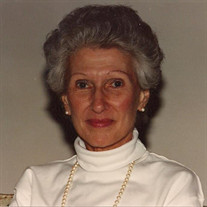 Mrs. Helen Morris Martin, 95, of Charlotte, NC, passed away on Saturday, June 2, 2018, at her home in Sharon Towers after a lengthy illness. A Funeral Service will be held on Thursday, June 7 at 11 AM at Union ARP Church in Richburg, SC, with the Reverend Watson Gunderson officiating. Interment will be held in the church cemetery. A native of Hamlet, North Carolina, Helen was the daughter of the late Thomas A. Morris and Carrie May Stewart Morris. She was preceded in death by her husband, Joseph Franklin (Buddy) Martin of Richburg, SC, where they lived for 58 years. She was also preceded in death by her brother, Thomas A. Morris, Jr. MD of Westport, MA. She graduated from Hamlet High School and attended Coker College in Hartsville, SC and Women's College of the University of North Carolina at Greensboro. Her love of country and sense of patriotism led her to Miami, Florida after the outbreak of World War II to work in a hospital where she met the love of her life, Buddy Martin. He had been wounded in the war and was sent to Miami from a hospital in Germany to recuperate. Six weeks later they were married. They soon moved back to Richburg, South Carolina where they remained until Buddy's death in 2003. During her time in Richburg she worked as an Executive Secretary at Morrison Textile Machinery Co. in Fort Lawn, SC until her retirement. She is survived by her nephew, Thomas A. Morris, III, MD, Kingston, MA., nieces, Mary Ada Morris Schwartz, Lynnfield, MA., Sara Dee Morris Thompson, Indialantic, Fl., Elizabeth Ann Morris Johnson, Bridgewater, MA., Susan Jeanne Morris, NH, and her Martin family, Virginia Osteen Pusser, Charlotte, NC, William Louis Osteen, Highlands, NC, Linda Martin Watson, Conyers, GA, Lyle Martin, Rome, GA, Virginia Little Cannon, Charlotte, NC, Carroll Little, Sun City, SC, Cathy Williams Beard, Anderson, SC, and Martin Williams, Harrisburg, NC. Mrs. Martin’s family would like to thank Carol Hassell, Chaplain of Sharon Towers, who spent time with Helen during her last days, to Hospice, especially to Jessica and Jill for their attention to making her comfortable, and to her companions of the last several months, most importantly to Ellen Ana who took tender loving care of her every need. The family requests that memorials be sent to Union ARP Church “Building Fund” PO Box 88, Richburg, SC 29729 Online condolences may be made to the family at www.barronfuneralhome.com.

Mrs. Helen Morris Martin, 95, of Charlotte, NC, passed away on Saturday, June 2, 2018, at her home in Sharon Towers after a lengthy illness. A Funeral Service will be held on Thursday, June 7 at 11 AM at Union ARP Church in Richburg, SC,... View Obituary & Service Information

The family of Helen Morris Martin created this Life Tributes page to make it easy to share your memories.