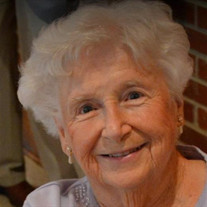 CHESTER, SC: Mrs. Evelyn Ross Bradford Wilson, 89, of Lowrys, widow of Joe Henry Wilson died Friday, February 12, 2016 at the Wayne T. Patrick Hospice House in Rock Hill. Born in Chester on December 31, 1926 she was the daughter of the late William and Mamie McKeown Bradford and was reared in the home of the late Melvin and Mary McKeown. Graduating from Chester High School, Evelyn worked as an operator for the Chester Telephone Company before marrying Joe Henry Wilson and moving to Lowrys. She found fulfillment beyond measure as a farm wife,mother and grandmother as well as becoming an essential part of the church and community. Admired and beloved by her many friends and large extended family, she had an open door, a place at the table and an unending supply of conversation and stories for young and old. She was the hub of family life, sharing her skills and values with multiple generations. She enjoyed watching her family grow and delighted in their accomplishments. Upon her arrival in Lowrys, she was invited to join the Lowrys Thursday Afternoon Book Club which she enjoyed throughout her lifetime. In 1991 she was inducted into the National Farm Homemakers Association which provided Joe and Evelyn opportunities to travel far and wide to attend and participate with like-minded friends they met across the country. Locally she was a member of the North Chester Neighbors FCL club for over 25 years where she again made friends as she shared her expertise of sewing and cooking. Many people in the area and especially her family and neighbors remember her for her yeast rolls, nutty fingers, macaroni pie and potato salad. Zion Presbyterian Church was a central part of her life as evidenced by her faithful attendance, her teaching of Sunday School for over 50 years, and her service throughout the Presbytery. Until her death she was the chairman of the morning circle. She was preceded in death by her husband, an infant daughter Josie Elizabeth Wilson, and a half-sister Jane Bradford Davis. She is survived by a daughter Rebecca (Becky)Wilson of Spartanburg, a son Joseph (Joey)Wilson, Jr, his wife Sanna and their three children Griff, Kemp and Liza Wilson, all of Lowrys., and cousins she regarded as siblings: Melvin McKeown, John McKeown, Flora Heinlein and Robert McKeown. Visitation will be Sunday February 14, 2016 from 2:00 PM – 3:30 PM at Barron Funeral Home and 4:00 P.M. – 8:00 P.M. Sunday, February 14, 2016 at her residence in Lowrys, and also 10:00 A.M. – 10:45 A.M. Monday, February 15, 2016 at Zion Presbyterian Church in Lowrys. Services to be conducted 11:00 A.M. Monday, February 15, 2016 at Zion Presbyterian Church with Rev. Al Ward and Rev. John McKeown officiating. Interment to follow the services at the Zion Cemetery. Memorials to be made to Zion Presbyterian Church. The Avenue, Chester SC. 29706

The family of Mrs. Evelyn Ross Bradford Wilson created this Life Tributes page to make it easy to share your memories.