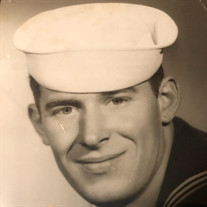 Chester, SC: Donald O’Neal Thomas, 88, died Saturday April 11, 2020 at Prisma Health Richland. Funeral services will be private. Mr. Thomas was born in Woodruff, SC on February 12, 1932 and was a son of the late Daniel Neal and Sallie (Hammond) Thomas. He was a graduate of high school through the GED program with the military. Mr. Thomas was a veteran of the U.S. Navy having served during the Korean War. He was retired from Canal Wood as a Forrester and was a member of West Chester Baptist Church and a former member of the Pathlighters Quartet. Mr. Thomas was also a member of Sandy River Masonic Lodge # 207. In addition to his parents, he is preceded in death by his granddaughter, Kristy Reid and his two brothers, Doug and Bobby Thomas. Don is survived by his wife of over sixty-six years, Elizabeth (McNinch) “Lib” Thomas; one daughter, Donna Thomas Reid(Ronald); one son, Michael E. Thomas(Laura) all of Chester, SC; five grandchildren, Alicia Toney(Scotty), Jennifer Reid, Kelly Tillman(Brian) and Whitney Gregory(Travis) all of Chester, SC and Joe Thomas(Christine) of York, SC and five great-grandchildren, Brady, Halen, Alyssa, Wyatt and Jack. Memorials may be made to West Chester Baptist Church 1898 Pinckney Road, Chester, SC 29706 Online condolences may be made to the family at www.barronfuneralhome.com.

The family of Donald O'Neal Thomas created this Life Tributes page to make it easy to share your memories.