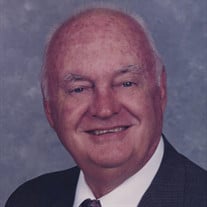 Blackstock, SC: Charles Jerry Tucker, 87, died Thursday, February 16 , 2022 at his home. A graveside service will be held 2:00 PM Sunday, February 20, 2022 at Blackstock First Baptist Church Cemetery with Reverend Jay Dorsey officiating. The family will receive friends at the graveside immediately following the service. Mr. Tucker was born in Chesterfield, SC on June 6, 1934 and was the son of the late Claude Wilson Tucker and Alfonzie Hancock Tucker. He was a graduate of Pageland High School and Clemson College. Mr. Tucker was a veteran of the U.S. Army having served in Germany and was a paratrooper with the 82nd Airborne. He was retired from the South Carolina Department of Motor Vehicles where he was a License Examiner and a Highway Patrolman. Charles was a member of Blackstock First Baptist Church where he was a former deacon, Sunday School teacher, choir member and served on the cemetery committee. he was also a Mason with Blackstock Masonic Lodge #180. He enjoyed traveling, fishing, canoeing and motorcycle riding and also golf and was very active in the Senior Sports at Springs Complex. In addition to his parents, Mr. Tucker was preceded in death by his son, Jerry Lynn Tucker and his brother, Johnny Tucker. He is survived by his wife of over 67 years, Geraldine Sellers Tucker; one daughter, Donna Roof of Blackstock, SC; two grandchildren, Elijah Paul Tucker (Bailey) of Chester, SC and Heather Lynn Means (Jeff) of York, SC; four great-grandchildren, Lynna Blythe Tucker, Seven Means, Veda Means, and Bristol Means. Memorial may be made to Blackstock First Baptist Church 907 Durham Road, Blackstock, SC 29014. Online condolences may be made to the family at www.barronfuneralhome.com.

The family of Charles Jerry Tucker created this Life Tributes page to make it easy to share your memories.