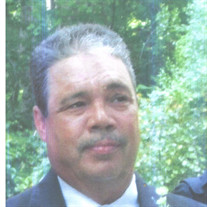 CHESTER: Mr. Timothy Hampton Sanders, 56, died Monday, December 7, 2015 at Bowling Green Medical Center in Bowling Green, KY. The funeral service will be 11:00 AM Saturday, December 12, 2015 at Armenia United Methodist Church with Rev. Eric Shepard and Rev. Jeff Gillfilan officiating. The family will receive friends from 10:00 – 11:00 AM Saturday, December 12, 2015 at Armenia United Methodist Church. Born September 5, 1959 in Chester, SC, Mr. Sanders was a son of the late William H. and Clara Comer Sanders. He was a graduate of Chester High School and York Technical College. He was employed with Fluor Construction as a millwright and was a member of Armenia United Methodist Church where he served as usher. He is survived by one daughter, Brittney Sanders-Hoyle and her husband Curtis of Clover, SC; one son, Jake Sanders of Catawba, SC; one grandson, James Hoyle of Clover, SC; two sisters, Faye S. Cummings and her husband Garry and Lynn S. Mobley both of Chester, SC and numerous nieces and nephews. He was preceded in death by a brother, William A. Sanders and a niece Martha A. Cummings. Memorials may be made to Armenia United Methodist Church, 2840 Armenia Road, Chester, SC 29706 or Gloryland Baptist Church, 2316 Legion Road, Smyrna, SC 29743.

The family of Mr. Timothy Hampton Sanders created this Life Tributes page to make it easy to share your memories.