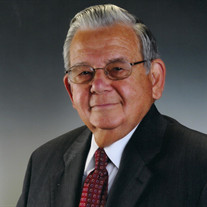 Mr. James Alton Wilson, Sr. , 87, died Saturday May 4, 2019 at The Presbyterian Home in Lexington, SC. The funeral service will be held 2:00 P.M. Tuesday, May 7, 2019 at Purity Presbyterian Church with Rev. Jason Myers and Barron Funeral Home Chaplain Rev. Steve Bishop officiating. The interment will be held in Rose Hill Cemetery, York, SC. The family will receive friends from 6:00 - 8:00 PM Monday, May 6, 2019 at Barron Funeral Home. Mr. Wilson was born February 21, 1932 in Atlanta, GA and was a son of the late Charles Ray Wilson and Evelyn Barfield Wilson. He was a graduate of Georgia Institute of Technology in Atlanta and received his Master's degree from University of South Carolina in Columbia, SC. Mr. Wilson was a veteran of the U.S. Navy with the rank of Lt.jg. having served during the Korean Conflict. He began his career in the Textile Industry working as a Textile Engineer in Atlanta, GA. Later he worked as a Home Construction Supervisor for Wiley Realty Co. in York, SC. Having a heart for students and their education, Mr. Wilson began his career as a math teacher at Hickory Grove High School in Hickory Grove, SC. His love for education would give him opportunity to serve as principal of Hickory Grove High School and Great Falls Elementary School. Later he would become Elementary School Supervisor and Adult Education Director for Chester County School District. During the last twenty years of his career with Chester County School District, Mr. Wilson would serve as Assistant Superintendent for Personnel and finally interim Superintendent until his retirement in 1988. A few years after his retirement, Mr. Wilson joined the staff of Barron Funeral Home where he again served the public and ministered to countless families always having their best interest at heart. He was a member and Elder of Purity Presbyterian Church where he served 22 years as church treasurer, former Sunday School teacher and Sunday School Superintendent. He is survived by two sons, James Wilson, Jr. of Charleston, SC and Dr. William Wilson (Susan) of Mt. Pleasant, SC; two daughters, Beth Whitesides (Warren) of York, SC and Mary Pettus (Tommy) of Clover, SC; twelve grandchildren; five great grandchildren; one sister, Martha Tedder (Don) of Cumming, GA and numerous nieces and nephews. Mr. Wilson was preceded in death by his wife of over 41 years, Daisy Belvin "Cookie" Burnett Wilson; a son Charles Melvin Wilson and a brother Charles Richard Wilson. Memorials may be made to Purity Presbyterian Church, PO Box 278, Chester, SC 29706. Online condolences may be made to the family at www.barronfuneralhome.com.

The family of James Alton Wilson Sr. created this Life Tributes page to make it easy to share your memories.