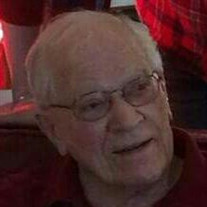 Chester James Marion Robinson, Jr. James Marion Robinson, Jr., 90, of Chester, SC, loving father, doting grandfather, and faithful husband, passed away peacefully on Tuesday, October 20, 2015 at Providence Hospital in Columbia. A Memorial Service will be held at 2:00 p.m. on Friday, October 23, 2015, at Purity Presbyterian Church, with Rev. Clint Davis officiating. The family will receive friends from 1:00 to 2:00 PM on Friday, October 23, 2015 at the church. Born in Chester, SC on September 2, 1925 to James Marion Robinson, Sr. and Kate McManus Robinson. Mr. Robinson attended Chester High School and North Carolina State University before joining the Army Air Corps, just prior to the end of World War II. After the war ended, Mr. Robinson returned to Chester to manage his father's business, Robinson Wholesale Groceries on Church Street. He would marry Georgie Eleanor Daniell on August 25, 1952 and entered the next phase of his working life as an independent marketing representative. He would remain in the furniture business for the next 40 years during which time he would be named President of the VCHFRA (Virginia/Carolinas Home Furnishings Representatives Association) and Treasurer of the NHFRA (National Home Furnishings Representatives Association). Mr. Robinson was a life-long member of his beloved Purity Presbyterian Church in Chester where he served as a Deacon, an Elder, and a member of the church choir. He was also a former member of the Chester Jaycees where he served a term as President. Mr. Robinson was predeceased by his wife Georgie Eleanor Robinson and his sister Sarah Robinson Breece. He is survived by two children, daughter Elizabeth Robinson Mayes of Boone, NC and her husband Oliver Scott Mayes, and his son Robert McManus Robinson of Chester, SC and his wife Beverly Gough Robinson. Mr. Robinson also had three grandchildren, Courtney Montgomery Robinson of Columbia, SC; Sarah Elizabeth Robinson of Fort Mill; and Patricia Daniell Mayes of Boone, NC. Memorials may be made Purity Presbyterian Church, 135 Wylie Street, Chester, SC 29706. Online condolences may be made to the family at barronfuneralhome.com.

The family of Mr. James Marion Robinson Jr. created this Life Tributes page to make it easy to share your memories.