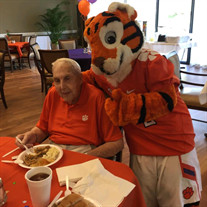 David Campbell (Pete) Wylie, Jr., 96, died Sunday, August 22, 2021 at Lexington Medical Center, Lexington, SC. Funeral services will be private due to Covid concerns. Born in Winnsboro, SC on September 14,1924 he was the son of the late David Campbell Wylie and Mae Wessinger Wylie. Pete graduated from Mount Zion Institute in Winnsboro in 1941. He entered Clemson College in 1941. In December 1942, he joined the U.S. Army enlisted reserves and was then called into active duty on June 30, 1943. Pete served in the 99th Infantry Division and was captured by German soldiers at the Battle of the Bulge on December 16, 1944. Along with 7 other American soldiers and with the help of Polish farmers, he escaped on April 2,1945 and rejoined Allied forces on April 13, 1945. He was awarded the Bronze Star and the Combat Infantry Badge. The South Carolina POW medal was awarded to him by Governor Nikki Haley in September 2015. He participated in the Honor Flight to the World War II Memorial in 2012 and received a Quilt of Valor in November 2016. He often reminisced about the many friends that gave the ultimate sacrifice. Upon discharge he returned to Clemson College in January 1946 and graduated in February 1947 (Class of 1947). Pete came to Chester in August of 1947 as the assistant County Agent of the Clemson Extension Service. In 1950, he was named the County Agent for Chester County and remained in that post until his retirement in 1980. Pete enjoyed beef cattle farming and spent many years in a farming partnership with Pete Lewis and John Lewis. Pete was a Director of the Spratt Savings and Loan from January 1970 to September 2013 and served several terms as chairman. He was also a director of the Chester Telephone Company and a trustee of the Chester Foundation. Pete was a member of Purity Presbyterian Church and was a former deacon and Chairman of the Board of Deacons. He was a member of Rotary. Pete was a member of the SC Cattlemen’s Association and many other agricultural organizations. Pete entered the Presbyterian Community in Lexington, SC in August 2013. In addition to his parents, he was preceded in death by his wife Charlotte Plowden (deceased November 2014) and three brothers, four sisters and one niece. He is survived by three sons, David C. Wylie, III (Leslie), Edwin P. Wylie (Lou) and Robert K. Wylie (Cheryl), four grandchildren, four great grandchildren, and four nieces and one nephew. His counsel and wisdom will be greatly missed by all Reverend Jason Myers and Reverend Dwight Pearson will officiate the service at Old Purity Cemetery. Barron Funeral Home is in charge of arrangements. Memorials may be made to Purity Presbyterian Church, P. O. Box 278, Chester, SC 29706 or to Presbyterian Communities of South Carolina, 2817 Ashland Road, Columbia, SC 29210. Online condolences may be made to the family at www.barronfuneralhome.com.

The family of David Campbell "Pete" Wylie Jr. created this Life Tributes page to make it easy to share your memories.