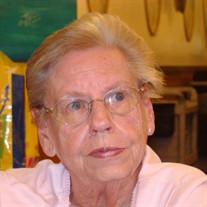 Chester, SC Blanche McFadden Martin, 84, died Monday, November 30, 2015 at Chester Regional Nursing Center. A funeral service will be held 2:00 PM on Thursday, December 3, 2015 at Woodward Baptist Church with Rev. Keith Hinson and Rev. Andy Logan officiating. Interment will follow at Zion Presbyterian Church Cemetery. The family will receive friends from 1:00 PM until 2:00 PM on Thursday, December 3, 2015 at Woodward Baptist Church and other times at the home of Steve and Joyce Martin. Born May 21, 1931, Ms. Martin was a daughter of the late John McFadden and Stella Evans McFadden and the widow of Harold W. Martin. She attended the schools of Easley, was retired from Merle Norman as a Beautician, and was a member of First Baptist Church, Lowrys. She is survived by two sons, Steve Martin (Joyce) and Gary Martin (Lunette) both of Lowrys, SC; one daughter, Cathy Winn of Lowrys, SC; two sisters, Emily Stewart of Pickens, SC and Shirley McFadden of Easley, SC; ten grandchildren four of whom made their home with Nannie and PaPa, Deanna Mobley, Tammy Dickson, Page Baker, and Stephanie Martin; twenty great grandchildren; and one great-great grandchild. Mrs. Martin was the widow of Harold Wallace Martin. Mrs. Martin was preceded in death by two sons, Jimmy and Dean Martin, one daughter, Brenda Martin; one sister, Betty James and one brother, Bill McFadden Memorials may be made to Hospice Care of SC, 173 Columbia St., Chester, SC 29706 Online condolences may be made to the family at www.barronfuneralhome.com.

The family of Blanche McFadden Martin created this Life Tributes page to make it easy to share your memories.