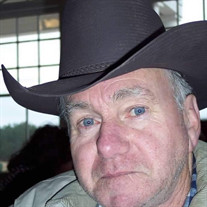 Chester Mr. Edward William “Buddy” Baker, Jr., 75, died Monday, January 25, 2021, at his home. A graveside service will be held at 11:00 AM Friday, January 29, 2021, at Armenia Methodist Church cemetery with Rev. Den Parker and Rev. James Curran officiating. Mr. Baker was born July 8, 1945 in Columbia, SC and was a son of the late Edward W. Baker, Sr. and Helen Wells Baker Gault. He attended the schools of Chester County, SC and was a veteran of the U.S. Army and also served in the S.C. National Guard. Buddy worked with Campus Sportswear until their closing and then joined Phillips Industries until his retirement. He was a member of Capers Chapel United Methodist Church. Buddy enjoyed playing lead guitar and singing. He was also an accomplished artist. Buddy loved the Lord and his family. He was a beloved husband, father and Papa Bud/Poppy. He was a quiet and simple man and everyone who knew him loved him. Buddy was a member of the North Chester Saddle Club. He is survived by his wife of over 52 years, Joyce Stephenson Baker; three daughters, Mary Baker Mobley (Clay), Hope Baker and Whitney Culton all of Chester; six grandchildren, Tyler Mobley (fiancé, Kourteney) of Spring, TX, Gracyn and Zayn Mobley of Chester, Madysen Baker of Chester, Taylor Culton of Chester and McKynzi May Gardner of Chester; one sister-in-law, Nancy Stewart (Mack) of Chester; one niece, Stephanie Caston (Chris) of Chester; one nephew, Eric Stewart (Kha) of Chester; and great nieces and nephews, Quinton, Evan, Landon and Savannah Caston and Charlie and Caroline Stewart all of Chester. Memorials may be made to Kindred Hospice, 223 S. Herlong Ave., Ste. 120, Rock Hill, SC 29732 or Capers Chapel UMC, c/o Ann Weir, 1092 Pineview Lakes Rd., Chester, SC 29706. Online condolences may be made to the family at www.barronfuneralhome.com.

The family of Mr. Edward William "Buddy" Baker Jr. created this Life Tributes page to make it easy to share your memories.