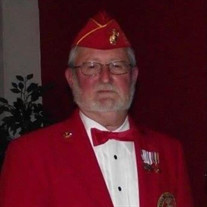 Chester, SC: Charles Luther "Ronnie" Johnson, 72, died Thursday, October 21, 2021 at his home. A memorial service will be held 11:00 AM Saturday October 30, 2021 at Barron Funeral Home Chapel with Reverend Clay Waldrip officiating and with full military honors. The family will receive friends anytime at the home. There will not be an interment at this time. Ronnie was born in Chester, SC on July 29, 1949 and was the son of the late Luther Lavet Johnson and Ruth (Robbins) Johnson. He was a 1968 graduate of Chester High School and then York Tech where he received his degree in Civil Engineering. Ronnie was retired from SCDOT where he was supervisor for the Survey Crew. He was of the Church of God faith. He was a veteran of the United States Marine Corp having served during the Vietnam War. Ronnie was a former member of the Marine Corp League Devil Dogs and the American Legion. He was a 2nd degree black belt in Karate and was also well advanced in Jiu-Jitsu. Mr. Johnson was an accomplished guitarist having played in numerous bands over a fifty year span. He was also a vocalist. In addition to his parents, Ronnie is preceded in death by a brother, Randall B. "Goober" Johnson. He is survived by his wife of over fifty-two years, Nancy Watts Johnson; one daughter, Nikki Johnson of Fort Mill, SC and one son, Chad Johnson (Christy) of York, SC; five grandchildren, McKenzie Millis Saunders of Charlotte, NC, Sydney Millis (Colin Miller) 0f Charlotte, NC, Christian Stumpf (Madison Bunch) of Morristown, TN, and Charlie Johnson and Chandler Johnson both of York, SC; a sister, Becky Roof of Chester, SC and a brother, Wayne Elwell (Debbie) of Union, SC; sisters-in-law, Kathy Walters (Billy) and Janet Johnson all of Chester, SC; special niece, Allyson Walters of Chester, SC and numerous other nieces and nephews and his life long friend, Jimmy Howell of Blackstock, SC. Memorials may be made to Wounded Warriors Project PO Box 258516 Topeka, KS 66675. Online condolences may be made to the family at www.barronfuneralhome.com.

The family of Charles Luther "Ronnie" Johnson created this Life Tributes page to make it easy to share your memories.