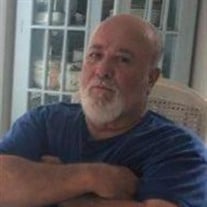 Chester,SC: Terrell “Terry” Delaney Hutto, 72, made his final gesture of mortal defiance on Thursday, November 26, 2020. Signing off on life in his words, "well-lived and with few regrets." All are welcome to join his family for the outdoor celebration of Terry’s life 2:00 p.m. Saturday December 12th 2020 at 1366 Darby Road Chester South Carolina 29706. Casual attire is encouraged. With the majority of his career spent as a general contractor, Terry also held a degree in machine tool technology. At retirement, his passions were spending time with family and riding motorcycles. He was a past member of the Knights of Columbus and the Rock Hill "HOG" Chapter. Born in Chester, SC on December 1, 1947, Terry is the son of Minnie Faye Hutto Bozard and the late J.W. Hutto. He is proceeded in death by his sister Cheryl Hutto. Left with decades of fond and colorful memories are his mother, wife Karen White Hutto, and sister Wanda Hutto all of Chester, SC. He leaves five children, Amanda Hutto Yount (Josh) of Charlotte, NC, Terrell Hutto (Sandra) of Black Mountain, NC, Anna Hutto Talbert (Brandon), Benjamin Hutto (Rebecca) and Jessica Hutto (Joaquin) all of Chester, SC. Terry relished his role as Papa, often times Grumpa, and hoped that he taught at least one of them to raise hell. He leaves behind a legacy of love and pride in his 12 surviving grandchildren. Terry faced his death and mortality, as he did with everything in life, head on, often telling family and loved ones that when he kicked over to dig a hole in the back yard and just roll him in, however, much to his disappointment but with great dignity he will be cremated at the discretion of family. To share a memory or give condolences to his family, please do so through Barron’s Website at www.barronfuneralhome.com.

Chester,SC: Terrell &#8220;Terry&#8221; Delaney Hutto, 72, made his final gesture of mortal defiance on Thursday, November 26, 2020. Signing off on life in his words, "well-lived and with few regrets." All are welcome to join his family for... View Obituary & Service Information

The family of Terrell "Terry" Delaney Hutto created this Life Tributes page to make it easy to share your memories.