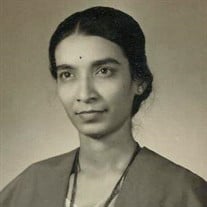 Falls Church, VA Dr. Pratibha Premanand Raut, 81, formerly of Chester, died December 15, 2018. A memorial service will be held at 2:00 PM Saturday, January 12th, 2019, at Barron Funeral Home, 133 Wylie St., Chester, SC. The family will greet friends after the service. Pratibha Premanand Raut (nee Pratibha Gajanan Save) was born on December 1, 1937 in the rural village of Bordi in the state of Maharashtra, India. At a time when only a small number of women were completing higher education, Dr. Raut graduated with distinction from college and then from Grant Medical School in Mumbai (Bombay), India, where she was awarded the prestigious gold medal for academic excellence. She completed training in obstetrics and gynecology at University of Bombay hospitals. She moved to the United States to Dallas, Texas in 1968 with her husband, Chester’s late Dr. Premanand S. Raut. She completed US certification in obstetrics and gynecology at Richland Memorial Hospital in Columbia, South Carolina, and a chief residency at Methodist Hospital in Brooklyn, New York, before starting her own practice in South Carolina in 1971. She and her husband, a surgeon, eventually settled in Chester, South Carolina, where they practiced at Chester Regional Medical Center and county health clinics for nearly 45 years. For many years, she was the only obstetrician in all of Chester County. In her professional practice, she brought thousands of babies into the world, all while raising her own two sons. Outside of work, she enjoyed spending time with her many close friends in the community. She exercised regularly and was an avid swimmer. She enjoyed gardening, singing traditional Hindi and Marathi songs, and collecting antiques. Dr. Raut received numerous accolades throughout her career. She was a Fellow of the United Kingdom’s Royal College of Obstetrics and Gynecology, a Fellow of the American College of Obstetrics and Gynecology, and a Fellow of the Canada’s Royal College of Surgeons. For a lifetime of service to the Chester community, she was even feted as Grand Marshall of Chester’s Martin Luther King, Jr. Day parade. After retiring from Chester, she moved to northern Virginia where she promptly unretired and shared her invaluable experience and expertise by volunteering as a gynecologist at a local clinic. She thoroughly enjoyed staying active mentally and physically. She took long walks daily, maintained her house, and enjoyed gardening. She embraced new things by trying Vietnamese and Ethiopian cuisine, attending local parades and fireworks, and exploring the D.C. museums. She deeply loved her grandchildren, allowing them to beat her at board games and spending as much time as she could with her newest grandson. She is predeceased by her husband, Dr. Premanand S. Raut, and is survived by her two sons, Dr. Chandrajit P. Raut and his wife Dr. Shilpa Grover and Anant P. Raut and his wife Katie Raut, and three grandchildren. In lieu of flowers, the family is asking that donations be made in her name to the Arlington Free Clinic (www.arlingtonfreeclinic.org), 2921 11th St S, Arlington, VA 22204, where she was a beloved volunteer. Online condolences may be made to the family at www.barronfuneralhome.com.

The family of Dr. Pratibha Premanand Raut created this Life Tributes page to make it easy to share your memories.