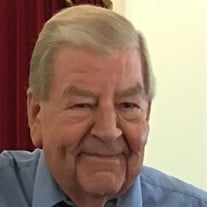 Ulrich Kurt Ludwig Eric “Ollie” Warnick, 81, died Saturday, December 4, 2021, surrounded by his family at ContinueCare Hospital at Palmetto Health Baptist in Columbia, SC. Interment will be private. The family will receive friends from 5:00 PM to 6:30 PM Friday, December 10, at Barron Funeral Home, 133 Wylie St., Chester, SC. Mr. Warnick was born April 4, 1940 in Rostock, East Germany and was a son of the late Kurt Warnick and Johanna Skrzypczak Warnick. He attended the schools of East Germany and was a veteran of the U.S. Army. He was owner and operator of Ollie’s Electric Service and was also retired from Chester County School District . Ollie was an accomplished craftsman and an excellent builder. He was of the Lutheran faith. He is survived by his wife of over 46 years, Dianne Adams Warnick; a step-daughter, Kathy Sprouse (Robert) of Lake Wateree, SC; three brothers, Wolfgang Warnick of Naples, FL, Karl Warnick of Arkansas, and David Warnick of New Jersey; two grandchildren, Wesley Gladden (Rebecca) of Lancaster, SC and Thomas Garrett Gladden of Boston, MA; and numerous nieces and nephews. Mr. Warnick was preceded in death by a son, Mike Warnick. Memorials may be made to Pleasant Grove Presbyterian Church, 1660 Pleasant Grove Rd., Chester, SC 29706 or a charity of one’s choice. Online condolences may be made to the family at www.barronfuneralhome.com.

The family of Mr. Ollie Warnick created this Life Tributes page to make it easy to share your memories.