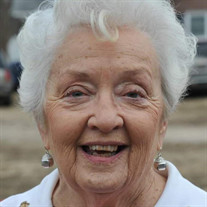 Noppy Frazer The happy cheerful lady we all know as “Noppy” has moved to the heavenly home with her beloved family waiting there. Bernice Catherine Bowles Frazer left this life on Tuesday, October 13, 2020 surrounded by her large loving family. She will be greatly missed. A graveside service will be held 10:00 AM Thursday, October 15, 2020 at Evergreen Cemetery with Reverend Jason Myers officiating. Noppy was born on June 29, 1927 at the home of her maternal grandparents, Mayor George and Bernice Byars on Pine Street in Chester, SC. Her parents were Emily Louise Byars and Durward Earle Bowles. Noppy was given her nickname by her Dad. She always said he thought her given name was a big name for a little girl. She lived in several South Carolina towns in her early days but loved Chester and considered it her home. She lost her father during her teen age years but enjoyed the extended family of aunts, uncles and cousins in the Chester area. In 1941 when the Louisiana and Carolina maneuvers were held in the Fall, Noppy joined the other young ladies of Chester in answering the call to join the soldiers for dancing on “top of the hill”. Noppy finished Chester High School in 1944 and Winthrop College in 1946 with a two-year business degree. In 1948, after his return from service, she married Samuel McCarthy Frazer, Jr. Sam graduated from Clemson College. He and Noppy with friends and family spent many happy Saturday’s going to Clemson football games. In fact, Sam died of a heart attack at a Clemson football game. Noppy was one of the early Springs Calendar Girls, appearing in the “We love to catch them On A Springmaid Sheet” calendar. She enjoyed being a part of the promotion and on-going attention that the risqué ads by Col. Elliott Springs received over the years. Noppy worked for several attorneys. She also worked for The Chester Telephone Company and was one of the early operators who asked “number please” when you picked up your phone. The system was a hands-on switch board operation for a number of years. Then for many years she worked for James T Triplett Inc. (Tom Triplett) until her retirement. She was active in Purity Presbyterian Church, teaching Sunday School and serving in many areas of the Church. She was a member of many Civic Clubs and always contributed to any organization she belonged to. One of the special events of the Frazer Family was the annual “Party Hardy” held in the pasture (once a racing and breeding farm) behind her home. The boys would cook a whole cow, a huge iron wash pot of corn-on-the-cob and other sides and most of the town would come and enjoy the evening. The joy of Noppy’s life was her faith and her family. Noppy is survived by four children, four grandchildren, three step grandchildren, and two great grandchildren. Her sons are Samuel M. Frazer, III (Kit) of Chester, John B. Frazer (Teresa) of Oak Island, NC, Durward B. Frazer (Melanie)of Chester, and one daughter, Catherine Frazer Crews (Shane) of Rock Hill, SC. Her grandchildren are Ashley F. McAtee (Josh) of Clover, SC, John C. Frazer (Megan) of Myrtle Beach, SC, Ann L. Frazer (Jennifer) of Atlanta, Ga., and Frazer Bennett of Rock Hill, SC. Step grandchildren are Rick Railey (Julie) of Chester, Angie Ferrier (Jimmy) of Tucson, AZ, and Rebecca Robertson of Washington, D C . Her great-grandchildren Vivian McAtee and Sam McAtee of Clover, SC. In addition, she is survived by many cousins from the Byars and Frazer families in the area. Noppy loved living in Chester but in 2018 she moved to Park Pointe Village in Rock Hill, SC. She has a wide circle of friends who enjoyed having her for a friend and neighbor during her years there. She leaves many friends behind in her “retirement” home. Memorials may be made to Purity Presbyterian Church 135 Wylie Street, Chester, SC 29706, Wayne T. Patrick Hospice House 2275 India Hook Road, Rock Hill, SC 29732, or The Samaritans Fund at Park Pointe Village 3025 Chesbrough Blvd, Rock Hill, SC 29732. Online condolences may be made to the family at www.barronfuneralhome.com.

Noppy Frazer The happy cheerful lady we all know as &#8220;Noppy&#8221; has moved to the heavenly home with her beloved family waiting there. Bernice Catherine Bowles Frazer left this life on Tuesday, October 13, 2020 surrounded by her large... View Obituary & Service Information

The family of Noppy Frazer created this Life Tributes page to make it easy to share your memories.

Noppy Frazer
The happy cheerful lady we all know as “Noppy”...