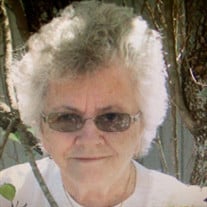 Chester, SC: Mary Nell McDaniel Rohmer, 85, died Monday, April 5, 2021 at MUSC Chester Health Nursing Center. Funeral arrangements are incomplete and will be announced at a later date. Mrs. Rohmer was born in Mascot, TN on April 4, 1936 and was a daughter of the late James McDaniel and Flora Williams McDaniel. She was a graduate of Carter High School in Mascot TN where she played fast pitch softball and basketball. She also had a love for bowling. Mrs. Rohmer was a member of Sacred Heart Catholic Church in Imlay City, MI and she was retired from ITT Auto Parts Manufacturer having worked as a machine operator. In addition to her parents, Mary was preceded in death by her husband, Stephen Paul Rohmer; a daughter, Cynthia Rohmer; a grandson, Stephen Rohmer and five brothers and a sister. She is survived by a daughter, Lisa Jessop (Steve) of Chester, SC; four grandchildren, Luis, Rey, Violet and Trevor; three great-grandchildren, Evan, Kaylum, and Dean; two sisters, Pat Boruff of Knoxville, TN and Sheila Morton of Mascot, TN; one brother, Bobby McDaniel of Mascot, TN and numerous nieces and nephews. Memorials may be made to the American Heart Association 7272 Greenville Avenue, Dallas TX, 75231. Online condolences may be made to the family at www.barronfuneronfuneralhome.com.

The family of Mary Nell McDaniel Rohmer created this Life Tributes page to make it easy to share your memories.