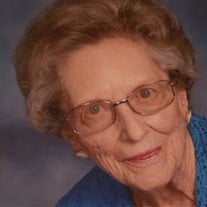 Chester, SC: Martha Susan Gross Watts, 87, died Wednesday, October 2, 2019 at Piedmont Medical Center, Rock Hill, SC. A Funeral Service will be held 11:00 AM Saturday, October 5, 2019 at First Baptist Church, Chester. The family will receive friends at Barron Funeral Home Friday, October 4, 2019 from 6:00 PM. until 8:00 PM. Interment will be held in Chester Memorial Gardens. Born November 15, 1931 in Richburg, SC, Mrs. Watts was a daughter of the late Joe Jordan Gross and Mary Estelle Caldwell Gross. She was a graduate of Lewisville High School where she was a basketball player and was retired from SCDOT as an administrative assistant. Martha was a member of First Baptist Church, Chester where she was the church clerk for many years and a member of the library staff and the Dorcas Sunday School. She was an avid bowler and she loved the Atlanta Braves and the South Carolina Gamecocks. She was a member of the Gamecock club for over fifty years and she seldom missed a home game and loved to travel to their away games. Mrs. Watts was preceded in death by her husband of over 57 years, William David “Bill” Watts, three brothers, Joe Jordan Gross, Jr., Marion Lee Gross and Robert O. “Bobby” Gross. She is survived by two daughters, Nancy W. Johnson (Ronnie) and Kathy W. Walters (Billy) all of Chester, SC; four grandchildren, Nikki Stumpf (Erik) of Lexington, SC, Chad Johnson (Christy) of York, SC, Allyson Walters of Fort Mill, SC and Josh Walters (Jenn) of Dillon, SC; eight great-grandchildren, McKenzie Millis (fiance’ Mack Saunders) of Lexington, SC, Sydney Millis of Atlanta, GA, Christian Stumpf of Morristown, TN, Chayse Walters, Edeigh Walters and Landry Walters all of Dillon, SC and Charlie and Chandler Johnson both of York, SC and a number of nieces and nephews. Memorials may be made to First Baptist Church “Library Fund’ PO Box 518, Chester, SC 29706. Online condolences may be made to the family at www.barronfuneralhome.com.

The family of Martha Susan Gross Watts created this Life Tributes page to make it easy to share your memories.