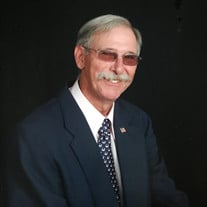 Chester Marion Richard “Ricky” Stevens, Jr., 64, passed away peacefully January 28, 2018 at his home. A memorial service will be held at 2:00 PM Friday, February 2, 2018, at Bethel United Methodist Church with Mr. Jack Kindle, Rev. John Linderman and Rev. David Sealy officiating. Interment will follow in Calvary Baptist Church cemetery. The family will receive friends from 6:00 PM to 8:00 PM on Thursday, February 1, at Barron Funeral Home, 133 Wylie St., Chester, SC. The son of the late Marion Richard Stevens, Sr. and Anita Grant Stevens, Ricky was born in Chester, SC, April 15, 1953. After graduating from Chester High School in 1971, he actively served in the United States Air Force completing tours during the Vietnam War in Guam, England and Massachusetts until he was honorably discharged in 1975. Ricky then graduated from York Technical College with an Associate’s Degree in Engineering and immediately went to work with GAF. Simultaneously, he worked alongside his father-in-law as an electrician. He assisted in the opening of Guardian Industries and loyally worked there from October 1988 until retiring in May 2015. He was most recently working at Chester Golf Course pursuing his passion for golf. Ricky was raised as a Master Mason in Chester Masonic Lodge #18 and later became a member of Richburg Masonic Lodge #89. He was a member of the Chester Yorkrite Bodies and of Hejaz Shrine. He also was a member of the Chester Chapter #15 Order of Eastern Star where he served as Worthy Patron several years and later became a member of Richburg Chapter #213. Ricky was a former member of the Chester Moose Lodge. Along with being a lifelong member of Bethel United Methodist Church and a devoted member of the Pete Wylie Sunday School Class, he also found joy in his many horses, dogs and cats. He and his wife, Karen were avid foxhunters with the Camden Hunt. Ricky is survived by Karen Faust Stevens, his loving wife of 38 years; a niece, Brittany “Lauren” Faust, whom they adopted as their own daughter; two sisters, Pamela Stevens Gourley and Janet Stevens Roberts; Dana Roberts, a brother-in-law and also a good friend; Steve Gourley, a dear brother-in-law whom he considered a brother; a sister-in-law, Lisa Faust Isenberg and her husband Perry all of Chester, SC; four nieces, Amy Gourley Perry and her husband Shane of Greer, SC, Brooke Gourley Williams and her husband Neil of Easley, SC, Jessica Isenberg Roth and her husband Herman of Newport News, VA, Chelsea Isenberg of Great Falls, SC; one nephew Cody Roberts of Chester, SC; three great nieces, Raegan, London, and Amelia; an honorary “little brother” Brian Carter; and lots of very loved aunts, uncles, and cousins. In addition to his parents, he was preceded in death by his wife’s parents, Julian Grant Faust and Adeline Carter Faust, whom he considered his own, and a dear sister-in-law Teresa “Terri” Lynn Faust all of Chester, SC. Memorials may be made to Friends of the Animals, PO Box 58, Chester, SC 29706; Relay for Life, c/o Christy Wilburn, P.O. Drawer 10, Chester, SC 29706; or Chester Golf Course, 770 Old Richburg Rd., Chester, SC 29706. Online condolences may be made to the family at www.barronfuneralhome.com

The family of Mr. Marion Richard "Ricky" Stevens Jr. created this Life Tributes page to make it easy to share your memories.