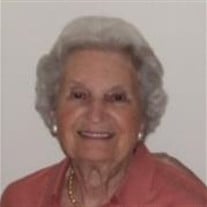 Greenville, SC Margaret Hemphill Howell McAngus passed away in Greenville, South Carolina on November 3, 2016. A Graveside Service will be held 2:00 PM Sunday, November 6, 2016 at Hopewell A.R.P. Church Cemetery, 1341 Hopewell Church Road, Blackstock, SC 29014 with Reverend Clint Davis officiating. Born in Walterboro, South Carolina on September 10, 1918, she was a daughter of the late Madison Peyton Howell and Martha Williams Gage Howell. After her mother’s early death, she grew up in Walterboro in a combined household of love with her father “Daddy” to all, her aunt, Patti Gage Fishburne, “Mama” to all and her uncle, Ladson Fishburne, “Dad” to all. In that close knit family were brothers, Madison Peyton Howell and Lucius Gaston Fishburne and sisters, Harriet Howell Stringfellow, Martha Howell Guess and Jane Fishburne Hipp, all of whom preceded her in death. Her infant brother George Gage Howell and her infant sister Jane Gaston Howell also preceded her in death. Margaret’s family spent their summers in Blowing Rock, NC where they were surrounded by a large extended family on “Gage Hill”. She recently celebrated her 98th birthday in the family cottage with her children. Margaret graduated from Walterboro High School and attended Converse College. She married her late husband, her Scotsman from Texas, Eli Hugh McAngus. They made their home in which their children were raised in West Point, Georgia. There she was a very active member of West Point Presbyterian Church and she enjoyed her ladies’ clubs, Spend-the-Day and The Forum. In their retirement years, she and husband “Mac” moved to Chester, South Carolina where they purchased the house which had belonged to her great-grandmother and namesake, Margaret Gaston, at 143 York Street. They spent many happy years surrounded by family, friends and lifetime memories. She received many family visitors to her ancestral home. Margaret was a member of Chester A.R. P. Church, of which her great-grandmother was a charter member. She also enjoyed belonging to clubs in which her grandmother had been a member, the Violet Sunshine Club and the Up To Date Club. Margaret, who was known as “Sissy” to family and old friends, was a person of devout faith, a mother consumed by the love of her children, a devoted wife to her husband “Mac”, a special aunt to many nieces and nephews and a faithful friend to many. Her family, both immediate and extended, was of most importance to her and she was in touch with them often. Always a gracious lady, her concern was ever for those around her. Until her death, her home was a welcoming place for those of all ages. After moving to Greenville in 2008, her children, grandchildren and great-grandchildren were her constant companions. Her candy supply never ended and her chocolate sauce and pound cake were legendary. Her hand sewn baby blankets were treasured. She was “Gran” to all on her street in her last home in Greenville and will be sorely missed. She was an inspiration to all who knew her in her zest for life and interest in others. Margaret is survived by her daughters, Martha McAngus Belcher (Jesse) and Mary McAngus Rifenberick (Bob) and her son William Hugh McAngus (Evon), ten adored grandchildren, Ladson Belcher (Ashley), Jess Belcher(Katie), Margaret Belcher Schmitt (Johnny), Jim Gettys (Ashley), Will Gettys (Beki), Harriet Coleman (Stuart), Hugh McAngus (Alicia), Andrews McAngus (Faith), Gage McAngus (Liza) and Ellen McAngus; twenty treasured great-grandchildren, Lad and Caroline Belcher, William and Frances Belcher, John, Janie and George Schmitt, Riley, Gage and John Houston Gettys, Eli and Hugh Gettys, Mary Mac and Stuart Coleman, Rowan and Ranger McAngus, Finley, Chellie and Eli McAngus and Eleanor McAngus. Memorials may be made to Chester A.R.P. Church, PO Box 174 Chester, SC 29706. Online condolences may be made to the family at www.barronfuneralhome.com.

The family of Mrs. Margaret Hemphill Howell McAngus created this Life Tributes page to make it easy to share your memories.