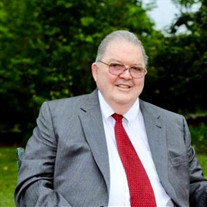 Joseph Monroe McElwee, beloved widower of Elizabeth Barron Auld McElwee, died peacefully at home January 24, 2019 while surrounded by his loving family. Joe was the son of Frank Love McElwee and Mildred Parrot McElwee and was born in the family home on Kings Mountain Street in Clover, SC, where he lived until he and Bep married August 27, 1954. Joe and Bep celebrated 61 years of marriage until her death in 2015. They have four children: Louise and her husband Mike Brown of Lake City, SC; Joe and his wife Sheryl of Anderson, SC; Beth and her husband Chris Daly of Richmond, Va.; Ann and her husband Matt McCrorey of Richburg, SC. In addition to his four children, Joe is survived by eleven grandchildren: Mike Brown (Jolie), Will Brown (Jessie), Elizabeth Brown; Barron Voskuil (Ryan), Tripp McElwee (Eliza), Anna Koon (Austin), Margaret McElwee; Mary Lapsley Daly, Christopher Daly; Garrison McCrorey (fiancé Gabriella), and Madison McCrorey. Five great-grandchildren also survive him: Devanie Brown, Andrew Brown, Caroline Brown, Roe Voskuil, and John Voskuil; two new great- grandchildren will arrive this spring. A life-long member of the Associate Reformed Presbyterian Church, Joe served the Chester A.R.P. Church in a number of capacities. He was a Sunday school teacher, a deacon, a ruling elder, and Trustee and past Vice Moderator of Session. He was a past Trustee of Erskine College and a past member of the Catawba Presbytery Boards and Commissions. He was co-founder of the church’s Boy Scout Troop 61, serving as Scout Master for 18 years. During this time, this former Eagle Scout was awarded the Silver Beaver Award for service to the organization and was inducted into the Chester County Boy Scout Hall of Fame. Joe graduated from Clover High School in 1951, where he served as Class President and remained actively involved with his classmates until his death. A graduate of Wofford College (1953,BA) and Vanderbilt University (1958, MA), Joe launched his career with Southern Bell Telephone Company. In 1968, Joe accepted the position of Vice President of The Chester Telephone Company. Under his leadership, the company thrived, and he served as President and CEO from 1976 until 2004, then continued as Chairman Emeritus of the Board of Directors until his death. He was Past President of the South Carolina Telephone Association and served on the Board of Directors for Palmetto Net, Inc., Palmetto Mobile Net, S.C. Net, Inc., and SC Telecommunications Group. Joe held numerous community leadership positions through the years. He served as President of the Chester County Chamber of Commerce, President of the Chester Economic Development Board, President of Chester Area United Way, President of the Rotary Club, member of the Newcomen Society, and member of the Board of Directors of Spratt Savings and Loan. He was a charter Board Member of the Chester County Disabilities and Special Needs Board. For 40 years, he served as Founder and Chairman of The Chester Foundation. He also served as Chairman and Trustee of the S. Lewis and Lucia B. Bell Foundation and was past Chairman of the York Technical College Foundation Board, where he was instrumental in bringing a satellite campus to Chester County. He was awarded the Duke Power Citizenship and Service Award, was inducted into the South Carolina Technical College Hall of Fame, was named a Paul Harris Fellow, and was recognized by former Governor Carroll Campbell for his distinguished service to the state of South Carolina. Above all, Joe was a very humble, quiet Christian servant who performed his services without a desire for recognition. He loved the solitude of the woods, the call of a turkey, the thrill of fly fishing, the sound of his children and grandchildren coming through the door, and the love he shared with his wife. Services will be conducted at 2 p.m. at the Chester A.R.P. Church on Saturday, January 26, 2019. Burial will follow at Hopewell A. R. P. Church Cemetery in Blackstock, SC. The family will receive friends anytime at the home. In lieu of flowers, memorials may be made to the Chester A. R. P. Church. PO Box 174, Chester, SC 29706. Micah 6:8 “He has shown you, O man, what is good; and what does the Lord require of you but to do justly, to love mercy, and to walk humbly with your God.”

Joseph Monroe McElwee, beloved widower of Elizabeth Barron Auld McElwee, died peacefully at home January 24, 2019 while surrounded by his loving family. Joe was the son of Frank Love McElwee and Mildred Parrot McElwee and was born in the... View Obituary & Service Information

The family of Mr. Joseph Monroe McElwee created this Life Tributes page to make it easy to share your memories.