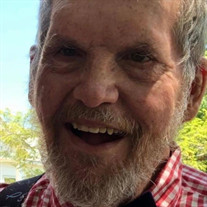 The Reverend John Scott Cloninger Sr., 67, passed away at his home in York, SC September 29, 2020. He was a son of the late Jimmy and Helen Cloninger of Great Falls, SC. He was preceded in death by his brother, James “Mack” Cloninger. He is survived by his wife, Reverend Nellie Cloninger, sons, John Scott Cloninger, daughter-in-law Beth, Franklin Cloninger, daughter-in-law Natalie, daughter, Patricia Cloninger and five grandchildren. The Reverend Scott Cloninger attended Great Falls High School, Clemson University, Wingate College and received his Master's of Divinity from Duke University. As a pastor, Scott was received into the SC Annual Conference of the United Methodist Church on trial in 1981 and appointed to attend Duke Seminary. He served the United Methodist Church for many years in many places across South Carolina, serving the following churches. - Tranquil-Center Charge, Mullins, SC, becoming an Ordained Elder in 1984 - Poplar-Antioch-Salem Charge, Conway, SC - Surfside United Methodist Church Associate Pastor, Surfside, SC - Mt. Pleasant United Methodist Church, Blythewood, SC - Hendersonville Charge, Walterboro, SC, Co-Pastor with his wife, Nellie - Mt. Lebanon-Kinards Charge, Greenwood, SC - Union Grove United Methodist Church, Belton/Anderson, SC - Heath Springs Charge, Heath Springs, SC - St. Luke-Zion United Methodist Church, Walhalla, SC - Liberty United Methodist Church, Liberty, SC - He retired in 2012 after many years of faithful service to the church. Scott loved to sing God’s praise, serving in many church choirs as well as the SCUMC Clergy Choir. In addition, to his service as a pulpit minister, Scott also served with the United Methodist Conference Youth Ministries assisting with Leadership Week and Youth Annual Conference where he spent much time running the canteen and as a group counselor. Scott also served with the Kairos Prison ministry. Scott was a sports enthusiast and avid gardener. After attending Clemson University, he was a steadfast Clemson fan and enjoyed going to games of all kinds there. Growing up on a farm in Blackstock, SC, he enjoyed immersing himself in the country life wherever he served and felt at home in his garden. As a husband, Scott highly valued his covenant relationship between himself, God and Nellie. Taking the tiny love between Nellie and himself he nurtured this love into the amazing love that lasted more than 40 years. As a father, Scott was the biggest fan of his children, supporting them loudly and proudly in every endeavor they took on. He was a master of providing gentle guidance, helping to counsel and care for them where ever we were. As a grandfather, he took a lot of delight in his grandchildren. His silly nature brought lots of joy to both he and the grandchildren. He was built with shoulders for crying on and arms for giving the best hugs. Scott, more than anything, loved people. As a pastor he loved the people in his congregation, as a person he loved the people around him of all backgrounds and personalities. He could converse with almost anyone and was the embodiment of love and care. A private graveside service will be held for the family. A drive through visitation will be held at Barron Funeral Home in Chester, SC from 2:30-4:30 on Sunday, October 4, 2020. A Celebration of Life Service will be held Friday, October 9th at 4 pm at Mt. Dearborn United Methodist Church in Great Falls, SC with Rev. Candice Sloan officiating. Online condolences may be made to the family at www.barronfuneralhome.com

The Reverend John Scott Cloninger Sr., 67, passed away at his home in York, SC September 29, 2020. He was a son of the late Jimmy and Helen Cloninger of Great Falls, SC. He was preceded in death by his brother, James &#8220;Mack&#8221; Cloninger.... View Obituary & Service Information

The family of Rev. John "Scott" Cloninger Sr. created this Life Tributes page to make it easy to share your memories.

The Reverend John Scott Cloninger Sr., 67, passed away at his...