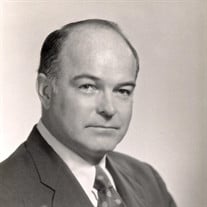 Atlanta, GA James Edward Cushman died Wednesday in Atlanta, Georgia. He was 84. From his birth, on October 11,1930, in Chester, South Carolina, to Anne Frazer Cushman and Carl Golden Cushman in Chester, South Carolina, his family and friends called him Jimmy, Atlantans called him Jim. As a term of endearment, his mother and daughter-in-law affectionately called him Gem. Smart, funny, and charming, Jim was a true visionary. He loved his family, friends, and dogs. He had a lifelong passion for horses and Angus cattle, both of which were present in great numbers on Millarden Farm, a farm the family owned in Woodbury, Georgia in the 1970’s. A proud South Carolinian, Jim earned his BS degree from Clemson University, graduating top of his class. He was a life-long Clemson fan and loved everything (from socks, to ties, and coffee mugs) orange. Jim received the first-ever Algernon Sydney Sullivan Award, and the Wade Woodward, Jr. award for his service to his alma-mater. Jim served his country as a lieutenant and aide-de-camp to General William Quinn during the Korean war. Appointed as the Director of the South Carolina Dairy Commission at the age of 22, Jim was the youngest person to ever head a South Carolina state agency. Later, he served as chief of staff to then Senator Strom Thurmond. Drawn to Atlanta, the city too busy to hate under Ivan Allen’s leadership, Jim Cushman moved to Atlanta to start a real estate career under mentor and close friend Ward Wight. Together they developed the original Lenox Towers and the first condominium in Atlanta, Paces Place. With Ward’s blessing, Jim struck out on his own with the idea of creating a mixed use development at 14th and Peachtree Street. Some refer to him as the “Father of Midtown”. Jim, with his “A team,” developed the first “live, work, play” complex in the southeast, Colony Square. Under the leadership of Stuart Alston, the “A team” has faithfully gathered together every Christmas. In 1973, Jim was recognized as the Atlanta Realtor of the Year. He was also awarded the Atlanta Urban design Commission Award of Excellence, and the Georgia Land Development- Outstanding Achievement Award. While his marriage, to Elkin Goddard Alston, ended in divorce, they were an amazing team: from real estate to farming, to throwing wonderful parties for family and friends, but most especially, raising two children. The family would like to give a special thanks to his caregivers at Philips Towers, the Veterans Hospital, and Emory Hospital. Jim is survived by his son Jimmy Cushman,Jr., Jimmy’s wife, Jackie, and their children Maggie and Robert Cushman, and daughter Elkin Cushman Taylor, her husband Roger, their children Jack and William and Roger’s daughters Lauren and Megan. Jim’s family will be welcoming family and friends at the home of Jackie and Jimmy Cushman Friday, April 10, from 6 - 8 p.m. for a celebration of his life. A memorial service will be held on Monday, April 13 at 1:00 PM at Purity Presbyterian Church, 135 Wylie St. in Chester, South Carolina with interment to follow in Evergreen Cemetery in Chester. Donations may be made in lieu of flowers if desired to Purity Presbyterian, P.O. Box 278, Chester, SC 29706. Online condolences may be made to the family at www.barronfuneralhome.com

The family of Mr. James Edward Cushman created this Life Tributes page to make it easy to share your memories.