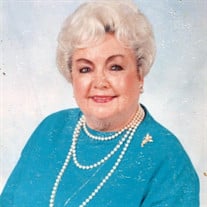 Winston-Salem, NC: Mrs. Helen Stevenson Steen, 87, passed away Tuesday, December 10, 2019, at Forsyth Medical Center. A funeral service will be held at 2:00 PM Wednesday, December 18, 2019 at Barron Funeral Home in Chester, SC, officiated by Rev. Michael Shaffer. The family will receive friends one hour prior to the service at the funeral home. Interment will follow at Chester Memorial Gardens. She was born August 23, 1932 in Fairfield County, SC., the daughter of the late David Lawrence and Mae Dickerson Stevenson. Helen enjoyed a successful career as a Real Estate/Broker in the Winston-Salem area. She was of the Baptist faith and volunteered at both the Cancer Center at Forsyth Medical Center and Mallard Creek Assisted Living, where she played piano. Helen was involved with the D.M.A. at Salem Baptist Church and was a follower of the Advent-Hopewell Moravian Band. She enjoyed playing the piano, shopping, going to concerts, plays and cruises. Helen was a kind loving person, who loved to hug. Her love for the piano led to spontaneous concerts at many venues in the area. In addition to her parents, Helen is preceded in death by her husband Grover Steen, Jr.; two sisters, Eloise Stevenson and Virginia McCallum; and five brothers: J.W., Steve, Ernest, Marion and Ralph Stevenson. Left to cherish her memory is her daughter, Robin Elise Steen of Chester, SC.; son, Kenneth Bryan Steen of Morganton; brother, Roy Milan Stevenson; half-brother, Jerry Stevenson; and her dear friend and companion, Vergil Gough. In lieu of flowers memorials may be made to the Salvation Army, 2688 Peters Creek Parkway, Winston-Salem, NC 27127 or The Little Theater of Winston-Salem, 419 Spruce St., Winston-Salem, NC 27101 or the Advent-Hopewell Moravian Band c/o Advent Moravian Church, 1514 W. Clemmonsville Rd., Winston-Salem, NC 27127. Online condolences may be made to the family at www.barronfuneralhome.com.

The family of Helen Stevenson Steen created this Life Tributes page to make it easy to share your memories.