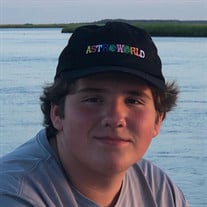 *******************************UPDATE*************************** THERE WILL BE A DEDICATION SERVICE AND COMMENTS AND A SCOUT TRIBUTE SUNDAY JUNE 6, 2021. ANYONE IS INVITED Evan Dwight Bass, 17, of Chester, passed away tragically, Friday, April 10th, 2020 in Chester, South Carolina. Special arrangements have been made due to current social restrictions. Please join the family for a unique drive-by visitation, to be held on Tuesday, April 14, 2020 at 4:00 pm at Barron Funeral Home. Guests will remain in their vehicles and drive through the parking lot receiving line. The drive-by is your opportunity to show support, express sympathies, smile, and share handwritten messages, memories, and pictures through your vehicle windows. There will be a celebration of Evan’s wonderful life to be held at a later date. Born in Rock Hill, South Carolina on March 4, 2003, Evan is the son of Bobby and Wendy Tinker Bass. Evan was a member of Chester ARP church where he enjoyed being a member of the Senior High Youth, working Bible School and participating in the annual church mission trip to Appalachia. Evan began attending Camp Bonclarken at age seven and served as a CIT for two years. Evan was a junior at Chester Senior High School where he was an honor student as well as being a dual enrollment student with York Technical College and anticipated receiving his Associates Degree next May. Evan participated in golf, wrestling, Beta Club and was a member of the Varsity Boys Soccer team. He was a dual sport letterman for the Cyclones. Evan was selected as a 2020 candidate to Palmetto Boys State. Evan was a member of Chester ARP Pack 61 where he earned the highest rank in Cub Scouting, the Arrow of Light. He was also a member of Chester ARP Troop 61 where he achieved Life Rank and was currently working on the rank of Eagle Scout. He served as a CIT at Camp Bob Hardin. He attended the 2017 National Jamboree. Evan was an active member of Skyuka Lodge #270, where he served many positions including Vice Chief of Inductions. He served as the Chester Chapter Chief for a term and he became an Ordeal Candidate, Brotherhood Candidate, and was presented the Vigil Honor in 2019. He attended multiple NOAC conferences and served his lodge tirelessly. Evan served several terms on the Palmetto Council SEALS course. Evans interests were sports, and he was an avid gamer. He loved the Carolina Panthers and the South Carolina Gamecocks. He loved the Coastal Carolina University baseball team where he served as batboy as a youth. In addition to his parents Evan is survived by his brother, Brady Coleman Bass; his maternal grandparents, Terry and Linda Tinker; his paternal grandmother, Fannie Bass; his paternal great grandmother, Becky Tinker; his aunts, Anna Tinker Faircloth (Jamie), Brenda Bass Kelly (Rick) and Sharon Bass Roof. Evan is also survived by a host of cousins, great aunts and uncles and family members who loved him dearly. Memorials may be made to Chester Associate Reformed Presbyterian Church, PO Box 174 Chester, SC 29706. Online condolences may be made to the family at www.barronfuneralhome.com.

The family of Evan Dwight Bass created this Life Tributes page to make it easy to share your memories.