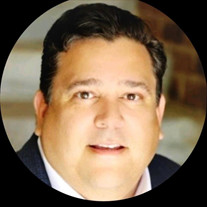 Erik Stumpf walked into heaven and hugged Jesus on April 30, 2021. His family believes he was greeted with his very own light saber, an official Mandalorian helmet, and a big box of Mike and Ike’s. We also believe he was given big bear hugs by his grandparents and his dad and a bunch of wet kisses from his favorite dogs Cici, Bernice, Maddox and Rocky all of whom preceded him in death. Erik’s impact on so many lives has left a lot of people heartbroken with losing him far too soon. He was an incredible dad to his son, Christian Robert, who followed in his footsteps as an insanely talented athlete and was lovingly nicknamed George. Erik’s daughters, McKenzie and Sydney were fiercely protected by their Papa Bear and even in their 20’s could be found jumping on his lap the same way they did as little girls. Erik was born in Porto Alegre, Brazil on March 24, 1974 where he and his twin sister, Karin were handpicked by their mother, Inge. He deeply loved his mom and step-dad, Inge and Dave Wallace. He was also the best brother to twin sister Karin and funniest uncle in the world to Bianca, Sasha, and Ronin. Erik’s love for his kids also extended to their significant others: Christian’s girlfriend Madison, McKenzie’s husband Mack, and Sydney’s boyfriend Colin. Erik was an incredible businessman and owned his own business, Stumpf Sales and Consulting. Erik could sell ice to an Eskimo because his infectious personality, handsome smile, and sense of humor meant he never met a stranger. He graduated from Fayetteville-Manlius High School in 1992 and Winthrop University with a BA in Marketing in 2000. Erik was an outstanding football player and carried his love of the sport into how he avidly supported the South Carolina Gamecocks. Most Saturdays over the years, he could be found at a Gamecock tailgate with his family, at a track meet cheering Christian on from the sidelines, throwing a football in the backyard, or at a softball field supporting his girls. Erik loved music and played the guitar. Erik was also a closet pyromaniac. One of his favorite activities was burning Christmas trees or anything in the general vicinity that was remotely flammable. Erik came to know Jesus at Highlands Church in Cumming, GA. He not only served the youth there, he led the parking team and loved being involved in his men’s small groups. Erik wished to be cremated. A portion of his remains will be laid to rest in Maine, his first US home. Another portion will travel to Williams -Brice stadium where Erik used to joke that perhaps his ashes could give the Gamecocks a winning football season. The remaining ashes will be divided so each of his kids and the love of his life the past 18 years, Nikki, can carry him with us always. In lieu of flowers, our family asks you honor his legacy in one of three ways: • Erik would have also wanted others to be led to Christ. You may support his passion for helping others find eternal life by giving to: Highlands Church 433 Canton Hwy, Bldg. 400 Cumming, GA 30040 • Erik and Nikki rescued many animals over the years. The work done by Dr. Wagner and staff is truly remarkable. A donation in Erik’s honor could save a fur baby: The Scooter Fund c/o Batesburg Leesville Animal Hospital 432 E. Columbia Avenue Leesville, SC. 29070 • Erik’s love for kids and sports can be supported by donating to: The Boys and Girls Club 311 Sulphur Springs Road Morristown, TN. 37813 A virtual celebration of life will be held on May 22, 2021. More details will be shared once they’re confirmed. Online condolences may be made to the family at www.barronfuneralhome.com.

Erik Stumpf walked into heaven and hugged Jesus on April 30, 2021. His family believes he was greeted with his very own light saber, an official Mandalorian helmet, and a big box of Mike and Ike&#8217;s. We also believe he was given big... View Obituary & Service Information

The family of Erik Stumpf created this Life Tributes page to make it easy to share your memories.

Erik Stumpf walked into heaven and hugged Jesus on April 30,...