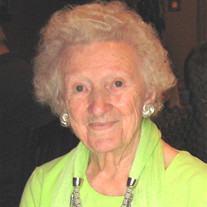 Blythewood, SC Mary Elizabeth “Tott” Horton, 97, passed away on Tuesday, November 10, 2015 at Palmetto Health Parkridge Hospital in Columbia,SC. A funeral service will be conducted at Bethel United Methodist Church in Chester, SC on Sunday, November 15, 2015 at 2:30 p.m. with a visitation at 1:30 p.m. prior to the service. The Revs. Jim Nates and Will R. Brown will officiate with burial following at Chester Memorial Gardens. Born on May 7, 1918 in Richburg, SC, Mrs. Horton is the daughter of the late Jesse Uriah Jordan and Emma Alice Anderson Jordan. She was a graduate of Great Falls public school and attended Winthrop College and Draughon’s Business College. She married the love of her life, Walter Howard “Abe” Horton of Kershaw on April Fool’s Day in 1943 and they were married two weeks before he left to serve in the United States Army during WWII. They were married for over 53 years until his passing in 1997. Mrs. Horton worked for 10 years with Springs Mills as the plant manager secretary. She also worked for 10 years as a bookkeeper for Coogler Oil Company. She was one of the first 3 policewomen in Chester County and was pictured in Along the Catawba River. She was a wife, homemaker and a wonderful mother to her two children, as well as being a surrogate mother to the neighborhood children and many of her daughters’ friends whom she loved until her passing. Mrs. Horton was a devoted member of Bethel United Methodist Church in Chester, SC since 1948. Among her many church activities, she sang in the choir, belonged to the Adult Fellowship class, taught kindergarten and vacation bible school, and was active in the UMW and the Bernadine Patterson Circle. She started each day by reading the Methodist Upper Room. “Tott” enjoyed knitting, sewing, singing, and corresponding with her family and friends. She knitted 50 ski sweaters for her children and nieces as well as donating some to the church “trash and treasures” auctions. She also wrote an unpublished book about her family and farm life. She was preceeded in death by her husband Walter Howard “Abe” Horton who was retired from the U.S. Postal Service, four brothers Robert Calhoun Jordan, Jesse Alvin Jordan, Carl Edward Jordan, Leonard Jordan and sister Emma Eunice Jordan Thomas and sister-in-law Marie Horton LaBruce (Allard). Survivors include daughters Elizabeth Lee Horton Long (John) of Chapin, Eunice Marie Horton Brophy (Tim) of Blythewood, sister Alice Jordan Nickles of Florence, step grandchildren Chris Long (Meredith) of Columbia, SC and Emily Long of Charleston and step great grandchildren Lucy and John Long of Columbia, niece Esther LaBruce Temple (Tom), many nieces and nephews and Grand Cats. Special thanks from the family to her many physicians and caregivers over the years. Memorials may be made to Bethel United Methodist Church, P.O. Box 751, Chester, SC. Barron Funeral Home, 133 Wylie Street, Chester, SC is in charge of arrangements.

The family of Mrs. Elizabeth "Tott" Horton created this Life Tributes page to make it easy to share your memories.