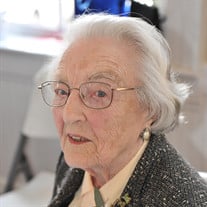 Chester Mrs. Dorothy Scott Mayes, 91, died Sunday, January 17, 2016, at Chester Regional Nursing Center. A memorial service will be held at 11:00 AM on Tuesday, January 19, 2016, at Purity Presbyterian Church with Dr. Harold Hutchinson officiating. Interment will be private. The family will receive friends from 10:00 AM to 11:00 AM in the social hall of the church. Mrs. Mayes was born March 4, 1924 in Hawick Scotland and was a daughter of the late Peter Scott and Helen Mary Fairbairn Scott. She was a graduate of Hawick High School in Hawick Scotland, a homemaker and a genealogist. Mrs. Mayes was a former member of the Chester Historical Society and was gracious to offer her extensive knowledge of Chester history to educate others. She was also a member of the Up-To-Date Club. Mrs. Mayes was a member of St. George Presbyterian Church in Hawick, Scotland. She is survived by one daughter, Kathryn Mayes Faircloth (Keith) of Chester; three sons, Alan Douglas Mayes (Kathryn) of Seattle, Washington, Robert Frederick Peter Mayes (Barbara) of Leesville, SC and Oliver Scott Mayes (Elizabeth) of Boone, NC; five grandchildren, Christopher, Nathan, Jamie, Ellen and Daniell; and four great grandchildren, Julia, Aiden, Owen and Anna Kathryn. Mrs. Mayes was preceded in death by her husband, Frederick Oliver Mayes. Memorials may be made to Purity Presbyterian Church, P.O. Box 278, Chester, SC 29706. Online condolences may be made to the family at www.barronfuneralhome.com.

The family of Mrs. Dorothy Scott Mayes created this Life Tributes page to make it easy to share your memories.