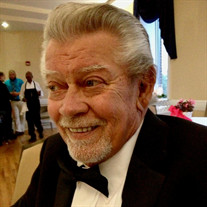 Dominic Eugene Germain (Gene), 76, passed away Saturday April 28 at Piedmont Medical Center. His family will receive friends at the home at 528 MacFarlane Drive in Chester. A visitation will be held at Barron’s Funeral Home on Wylie Street in Chester on Thursday evening from 6:00-8:00. The Rosary will be said as a prayer that Gene will be received into the embrace of the Lord through the intercession of the Blessed Virgin Mary. A funeral mass will be held at St. Joseph’s Catholic Church on West End St. in Chester on Friday morning at 11:00. Burial will be private. Gene was born Oct. 15, 1941 in Phillipsburg, New Jersey and grew up in the town of High Bridge in north central New Jersey. He was a son of the late Anne Matthews Germain and Dr. Santos Raymond Germain. He attended The University of Buffalo in Buffalo, New York before enlisting in the Marine Corp. He served honorably and with pride in southeast Asia and Vietnam. After his discharge from The Corps, he worked in Washington , D.C. as a federal government sales representative for Smith Corona. Here he met his future wife and lifelong partner and friend Carol. They settled in Buffalo, New York after living several years in the US Virgin Islands and Mexico. Here Gene was the sole proprietor of Germain’s Antiques and Auctions. After retiring and relocating to Chester, Gene worked at the Chester Golf Course as part of the grounds maintenance crew. An avid golfer, he was a member and past president of the Chester Men’s Golf Association. A devoted husband and father, he is survived by his wife Carol Rollins Germain, a teacher and literacy coach for more than 20 years with the Chester County School District, daughter Teresa Croce (Robert) of Brooklyn NY; son Dominic II (Lorraine) of Austin, Texas; brother Anthony (Deborah) of Framingham, Massachusetts; grandchildren Marisa and Tiana Croce of Brooklyn, NY, Giana and Anthony Germain of Austin, Texas, nephews Michael and Nicholas Germain of Framingham, Massachusetts, and numerous cousins and friends in New York and New Jersey, and Florida. Dominic Eugene will be greatly missed by his family and friends, who pray for the Grace of God on all who loved and cherished him and that he will rest in peace in the arms of the angels.

Dominic Eugene Germain (Gene), 76, passed away Saturday April 28 at Piedmont Medical Center. His family will receive friends at the home at 528 MacFarlane Drive in Chester. A visitation will be held at Barron&#8217;s Funeral Home on Wylie... View Obituary & Service Information

The family of Mr. Dominic Eugene "Gene" Germain created this Life Tributes page to make it easy to share your memories.