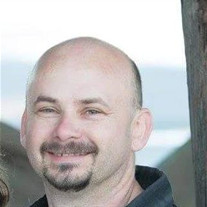 Blackstock Bryan E. Secrist, 45, died Tuesday, March 6, 2018, at his home. Funeral services will be held at 11:00 AM Saturday, March 10, 2018, at Blackstock First Baptist Church with Rev. Stacey Hinson officiating. Interment will follow in the church cemetery. The family will receive friends from 6:00 PM to 8:00 PM Friday, March 9, at Barron Funeral Home. Mr. Secrist was born February 14, 1973, in Mansfield, OH and was a son of the late Dale Allen Secrist, Sr. and Martha Bell Underwood Secrist. He was a graduate of Madison High School of Mansfield, OH and was employed with Global Energy Services. He considered himself a “Jack of All Trades”. Mr. Secrist was a member of Blackstock First Baptist Church where he served on the Youth Committee and took care of the Facebook page and the church sign. He is survived by his wife of over 24 years, Destiny “Dusty” Secrist; one daughter, McKenzie “Miki” Secrist of Great Falls; one son, Jonathan Secrist of Blackstock; one sister, Bonnie Schulties (Brian) of Surfside Beach; one brother,Dale A. Secrist, Jr. of Mansfield, OH; and several nieces and nephews. Mr. Secrist was preceded in death by a brother, Carl Douglas Secrist. In lieu of flowers, Memorials may be made to Blackstock First Baptist Church, 907 Durham Rd., Blackstock, SC 29014. Online condolences may be made to the family at www.barronfuneralhome.com

The family of Mr. Bryan E. Secrist created this Life Tributes page to make it easy to share your memories.