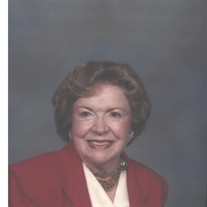 CHESTER, SC: The funeral service for Belva Funderburk Grant Boland Beaver will be 11:00 A.M. Friday, April 24, 2015 at First Baptist Church of Chester with Rev. Clay Waldrip officiating. The interment will follow in Chester Memorial Gardens. The family received friends from 6:00 – 8:00 P.M. Thursday evening at Barron Funeral Home. Born in Chesterfield County, SC, Belva was the eldest of seven children in the Orion J. Funderburk and Varnie Plyler Funderburk family. She was educated at Pageland High School, received a B.S. degree in Psychology at the University of South Carolina, after which she was an elementary school teacher for eight years. Then she worked as a personal secretary for S.C. Governor Olin D. Johnston until he was elected U.S. Senator. Soon after, she married State Senator Wilbur G. Grant and came to Chester to live for the remainder of her life. Belva and Wilbur had two adopted sons, Olin D. Grant, who resides in Chester, and Wilbur G. Grant, Jr. who resides on Lake Wateree. She was blessed with eight grandchildren and eight great grandchildren who survive her. She is survived by one sister, Vernie Gosh Clack of Rock Hill and one adopted brother, Calvin C. Funderburk of Sharon, SC. For most of Belva’s adult life she was involved in politics, and had varied interests in many civic and community activities. She was a member of the S.C. Business and Professional Women’s Club and served twenty-seven years as chairman of the Chester County Democratic Party. After the passing of Senator Grant, she became President of Better Beverage Company and Southern Coal and Oil Company with which both sons were associated. Later Belva married Clyde F. Boland, Public Service Commissioner and member of the House of Representatives for Charleston, S.C. Clyde passed away after a few years. She later married Gene Beaver, an auto dealer from Concord, NC, who passed away after a few years. Belva was the epitome of a “Southern Lady” in her fastidiousness and wanting things to be done in proper order and decorum. She greatly enjoyed entertaining and showing hospitality to family, friends, acquaintances, and new people at her table. She taught Sunday School for many, many years at First Baptist Church in Chester. She volunteered for Meals on Wheels for many years and was involved with World Hunger Relief and Billy Graham World Missions. In 1984 Belva became the first female elected to a full term on the S.C. State Highway and Public Transportation Commission, representing Chester, Lancaster, and Fairfield Counties. She had always had a particular interest in the Highway Department and its work, since her late husband, Wilbur, authored the “Farm to Market” roads bill some years before. Upon her 1988 retirement as a Highway Commissioner, she was presented an Outstanding Concurrent Resolution to name the new Chester Motor Vehicle License Building in her honor. Belva loved the Lord and her family and friends greatly. She had a life-long enjoyment of flowers, her pets, dancing, the beach, and her adopted town of Chester and its’ people. Belva loved loyally and gave her best in an engaged and active life from beginning to end; and on April 21, 2015 her address was eternally changed.

The family of Mrs. Belva Funderburk Grant Boland Beaver created this Life Tributes page to make it easy to share your memories.