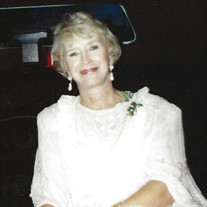 Annie “Anne” Ruth (Howell) Campbell On August 25th, Annie Ruth (Howell) Campbell passed. “The Angels sang.” They rejoiced knowing Anne was with her Savior. A graveside service will be held at 10:00 AM Wednesday, September 1st 2021, at Chester Memorial Gardens with Reverend Mike Burgess officiating. Born to Gordon and Mary Howell of Chester, S.C., Anne’s life and legacy will live on for her generous, loving and loyal spirit. She died in peace with grace, dignity and courage, surrounded by those she loved and those who loved her. She will be missed! Anne and her husband Hal have been residents at Patriots Colony for 17 years and are members of Williamsburg United Methodist Church. Anne grew up in Chester, SC, a “Happy Days Town,” where she and her friends learned the values of integrity, friendship, loyalty, responsibility and trust. She participated in all facets of her school years serving in many leadership roles. During her sophomore year in high school, she met Hal, a senior, on a blind date. After Hal graduated from Clemson University he entered active military duty while Anne completed her education at Winthrop College. They were married on October 3, 1953 -- seven years after their first date. Hal’s military service took them on assignments across the world, including stops in Virginia, Texas, Oklahoma, Georgia, Kansas, Kentucky, Germany and Hawaii - although not necessarily in that order. Along the way, son Steve was born in 1955, and Scott two years later. The boys became Anne’s loving priority, making each assignment an adventure for the family. Anne’s love and attention served to equip her sons to easily make friends and adapt to changing situations and frequent moves. With her love for entertaining and her engaging personality, she gathered numerous lifelong friendships along the way. Anne excelled in her role as an officer’s wife by serving in various Officer Wives Clubs and community service organizations including stints as President. She was selected to chair a committee at Hunter Army Airfield, Savannah, GA, to remodel and redecorate Officer, NCO and Enlisted Clubs as well as Bachelor Officer Quarters. Later at Fort Eustis, VA she chaired a committee to work with contractors, decorators and designers during construction of new Enlisted Quarters to improve functionality of layout, design modifications and amenities. And at Fort Benning, GA, she received extensive training as a Red Cross counselor to provide guidance and advice for personnel in the 3rd Infantry Division. During Hal’s attendance at Graduate School at William & Mary, Anne worked at the Institute of Early American History and Culture as Subscription Manager for the William & Mary Quarterly. With her adventurous and competitive spirit Anne willingly embraced exciting challenges. She was an avid bridge player and golfer winning numerous championships in both. While the family was stationed in Hawaii, Anne volunteered to work in The Hawaiian Open Golf Championship and was recruited by NBC as a color commentator. Over her 30 years in Hawaii, she worked as a volunteer in over 100, PGA and LPGA tournaments, served on the Ladies State Golf Course Rating Team and was selected to play in the “Ladies Hawaiian Open” with the wife of Hawaiian singer, Don Ho-they won. Anne liked to say: “We fell in love with the island people and remained for 30 years.” She joined PEO, cherishing her long association with “Her Sisters” in a worthy cause for women. On Maui, she was selected by a prominent Japanese tour agency to appear on the cover of their national tourist magazine. On Oahu, she and a friend created a successful commercial design and decorating business, selling her interests only after the family’s move to Maui where Hal had been selected to be a District Manager. Once on Maui, the family found their church home at Makawao Union Church. Both Anne and Hal became active in the church and Anne became the first woman to serve as Moderator of this ancient and famous church that was on both the State and National registers. Under her leadership, a corpus was created for the continuing maintenance of the church. Although they felt they were living in “Camelot”, she never lost her desire to return home. After 30 years in Hawaii, Anne and Hal returned to the mainland, deciding to live in Patriots Colony and finding new friends. Her philosophy was: “Everyone should leave each community better than they found it”. She was true to her beliefs. She was preceded in death by her parents, son, Scott Howell Campbell (Cynthia), brother, Malcom L, Howell (Doodie), sister, Mary Edith Grant (Samuel) and Alter Parents, Curtis and Martha Bailey. Anne is survived by her husband of 68 years, LTC (RET) Harold T. Campbell, son, Colonel (RET) Stephen T. Campbell, Granddaughter Ann Marie Campbell (Michael), Great Granddaughter Anna Marie Hunt, Grandson, Thomas Patrick Campbell, (Allison), and Great Granddaughter, Fiona Marie Campbell. Anne’s family expresses deep appreciation to Dr. Rocco Basciano, the many caregivers of Patriots Colony and The Williamsburg Hospice House for their exemplary and loving care. She appreciated, more than can be imagined, the dedicated loyalty and support by her many friends by their visits, cards and gifts during her final journey. May she rest in peace! In lieu of flowers, please honor her life by contributing to Williamsburg Hospice House and St. Jude’s Children’s Research Hospital. Online condolences may be made to the family at www.barronfuneralhome.com.

The family of Annie "Anne" Ruth Howell Campbell created this Life Tributes page to make it easy to share your memories.