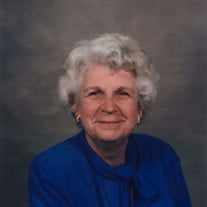 Ann Callender Davidson Marion, 92, of Chester, SC, died on Monday, June 17, 2019 at the Wayne T. Patrick Hospice House in Rock Hill, S.C. Her burial will be private at Evergreen Cemetery followed by a memorial service at Chester Associate Reformed Presbyterian Church on Friday, June 21st at 11 a.m. conducted by Dr. Dwight L. Pearson and Dr. Buzzy Elder. A visitation and reception for all friends and family will immediately follow the service in the Barron Room of the Chester A.R.P, Church. Mrs. Marion was born October 9, 1926 in Chester, S.C., the daughter of Nell Eulalia Purvis and William Lee Davidson, DDS. She attended the public schools of Chester, including Foote Street School and College Street School, and graduated from Chester High School in 1943. She received a Bachelor of Arts degree in English from Converse College in 1947. Before her marriage, she taught kindergarten at Purity Presbyterian Church. Ann was married to Malcolm Lafayette Marion, Jr. M.D. on Sept. 4, 1948 at Purity Presbyterian Church. The family has lived in Chester except for time spent at Donaldson A.F.B. in Greenville, S.C. and Rein Mein A.F.B. in Germany while Dr. Marion served in the Air Force in the early 1950’s. Mrs. Marion joined the Chester Associate Reformed Presbyterian Church after her marriage. There, she served as a circle leader, on the committee to publish a history of the church and as the president of the Synod Committee on Historical Concerns. She spent her married life as a help-mate to her husband’s Family Medicine practice, answering the telephone and relaying messages for him all hours of the day and night. She also filled in at his front office when needed. Mrs. Marion was an avid genealogist and an authority on local and state history, keeping extensive files on her own, as well as numerous other Chester County families; the mayors of Chester; and the doctors of Chester. She helped to publish two volumes of Chester County Historic Sites. She has served as the president of the Chester County Historical Society, the Confederation of Local Historical Societies, the Chester Main Street Advisory Board and the Catawba Regional Historical Preservation Advisory Committee. Mrs. Marion was instrumental in the establishment of the Chester County Historical Society Museum. She served for many years as the president of the Chester County Library Board, the Evergreen Cemetery Commission and the SC Hall of Fame. She was honored by the Piedmont Girl Scouts as a 1995 Woman of Achievement and by Duke Energy with the Citizenship and Service Award in 2011. She has been involved in many local organizations, serving as president of the Chester Assembly, the Chester Cotillion, the Violet Sunshine Club, and the Up-to-Date Club. She was a member of the D.A.R., the U.D.C., the Daughters of the Cincinnati, the Colonial Dames and the Huguenot Society of the United States and well as the Huguenot Society of South Carolina. She was honored by the Chester Rotary Club as a Paul Harris Fellow. Mrs. Marion was a loyal alumna of 72 years of Converse College and was proud to be the matriarch of a family of alumnae including a daughter, daughter-in-law and two granddaughters. She served as the President of the Converse Alumni Association. She was honored by Converse College with the Mae Kilgo Spirit Award in 2002. She was also a supporter of her sons’ alma mater, Wofford College, where she served as president of the Parents’ Advisory Council. Mrs. Marion loved the outdoors and yard work. She had strong opinions of right and wrong and stressed to her children and grandchildren proper grammar and etiquette. She loved her close and extended family and enjoyed claiming kin to anyone she was able to connect with. She was always grateful for any small thing and even during her declining years was noted for telling everyone how much she loved them and how beautiful they were. Mrs. Marion was pre-deceased by her parents, an infant sister, Nell Purvis Davidson, and her husband. She is survived by her four children and their spouses: Malcolm Lafayette Marion, III, M.D. and his wife Jeannie McCollum Marion; William Lee Davidson Marion J.D.; Alexander Douglas Marion, M.D. and his wife Susan Secord Marion; and Ann Davidson Marion Lorenz, OTR and her husband Robert Lorenz. She is also survived by six grandchildren: Jane McCollum Marion Wilson and her husband J.E.B. Wilson; Matthew Irvine Marion and his wife Stephanie Cirilo Marion; Sarah Whitfield Marion; Laura Douglass Marion; Peyton Donaldson Marion; and Robert Malcolm Lorenz and his wife Crystal Chassereau Lorenz. She is also survived by five great grandchildren: Malcolm Jefferson (“Mac”) Wilson, Burris Davidson Wilson, Robert Samuel Marion, Cora Rose Marion, and Rowan Jace Lorenz. The family would like to express their love and appreciation to care-givers while she was at home as well as all the staff at the Hospice House for their loving and devoted care to Mrs. Marion during her declining health. Each one was a blessing to the entire family. The family suggests that in lieu of flowers, memorials in her honor be made to the Chester A.R.P. Church, P.O. Box 174, Chester, SC 29706: the Chester County Historical Society, P.O. Box 811, Chester, SC 29706; or The Ann Davidson Marion Scholarship at Converse College, 580 E. Main St, Spartanburg, SC 29302. Online condolences may be made to the family at www.barronfuneralhome.com.

The family of Ann Callender Davidson Marion created this Life Tributes page to make it easy to share your memories.