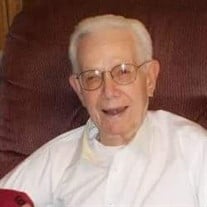 CHESTER, SC: Mr. Andrew White Boyd, Jr., 86, died Friday, February 12, 2016 at the Chester Regional Nursing Center. The funeral service will be 3:00 PM Monday, February 15, 2016 at Pleasant Grove Presbyterian Church Cemetery with Rev. Matt Horne and Rev. Ed Melvin officiating. The interment will be in the church cemetery with Masonic Rites. The family will receive friends from 6:00 PM – 8:00 PM Sunday, February 14, 2016 at Barron Funeral Home and other times at his home. Born June 3, 1929 in Chester, SC, Mr. Boyd was a son of the late Andrew White Boyd, Sr. and Nannie Josephine Brooks Boyd. He was a graduate of Blackstock High School and a veteran of the US Army having served during the Korean War. He was retired from Springs Industries and Barron Funeral Home. He was a lifetime member of Pleasant Grove Presbyterian Church where he was former moderator of the Presbytery. He was a former Sunday School teacher, choir member and served as an Elder. Mr. Boyd was elected as Elder Emeritus and was a lay speaker for the Presbyterian Community. Andrew and his wife Peggy were also youth leaders for several years. He was a member and past Master of the Chester Masonic Lodge #18 and also served as Past District Deputy Grand Master of the 23rd Masonic District. Andrew received his fifty year Masonic pin in 2007. After retirement from Springs Industries and during his career with Barron Funeral Home Mr. Boyd enjoyed volunteering for the AARP tax service. He was a Gideon, a former member of Springs Golden Age Club and a former member of the Toastmasters International Club. He enjoyed spending time with his family and playing golf. Mr. Boyd was preceded in death by his beloved wife of over fifty-four years, Elizabeth Jane “Peggy” Helms Boyd, a granddaughter, Jacqueline Suzanne Boyd, two brothers, Robert Thomas “Tommy” Boyd and William Wallace “Buck” Boyd. He is survived by one son, Gene Boyd and his wife Susan Clinton Boyd of Chester; one daughter, Phyllis Boyd Stroud and her husband Don of Rock Hill, SC; four grandchildren, Andy Boyd and his wife Marijohn of Seneca, SC, Rebekah Hinson and her husband Jason of Chester, Will Stroud and his wife Nicole of Columbia, SC and Josie Stroud of Rock Hill; two great grandchildren, Colbyn Drew Hinson of Chester and Brooks Adam Stroud of Columbia, SC; two brothers, George Boyd and his wife Adell and Dennis Boyd and his wife Brenda all of Blackstock, SC and a sister, Janie Swygart of Chester. Memorials may be made to Pleasant Grove Presbyterian Church, 1660 Pleasant Grove Road, Chester, SC 29706 and Hospice Care of South Carolina, 173 Columbia Street, Chester, SC 29706.

The family of Mr. Andrew White Boyd Jr. created this Life Tributes page to make it easy to share your memories.