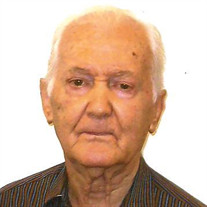 Chester Mr. Abramo Mario Bellucci, 95, died Sunday, March 17, 2019, at MUSC-Lancaster Medical Center. A graveside service will be held at 1:00 PM Wednesday, March 20, 2019, at Greenlawn Cemetery, Great Falls with Father Francis Gillespie officiating. The family will receive friends at the graveside following the service. Mr. Bellucci was born September 24, 1923 in San Demetrio Corone, Italy and was a son of the late Francesco Bellucci and Vittoria Saraceno Bellucci. He was a graduate of the school systems of Italy and a veteran of the Italian Air Force. He was retired from Springs Industries and was of the Catholic faith. Mario led an interesting life. As fate would have it, he found himself in a slave labor camp as a result of the German domination of Italy during World War II. After approximately two years, Germany fell to the Allies and Mario found himself on the Russian occupied side of Germany where he had to escape to the American side. He did indeed escape to the American side of Italy but because of the great devastation in Italy, he traveled to Argentina and spent about 14 years there. From Argentina he migrated to Brooklyn, New York City. While in Brooklyn, Mario met Betty Carpenter of Great Falls, SC who later became his wife. They eventually moved to Chester, SC and lived on Harris Street. He was a kind and gracious gentleman. Mario was always able to make friends wherever he went and because of his ability to befriend others, Mario won the heart of the Chester community. He is survived by a step daughter, Brenda Thomas of Great Falls, SC and a step granddaughter, Kristina Thomas of Fort Lawn, SC. Mario was preceded in death by his wife, Betty Carpenter Bellucci. Memorials may be made to St. Josephs Catholic Church, 110 West End St., Chester, SC 29706. Online condolences may be made to the family at www.barronfuneralhome.com.

The family of Mr. Abramo Mario Bellucci created this Life Tributes page to make it easy to share your memories.